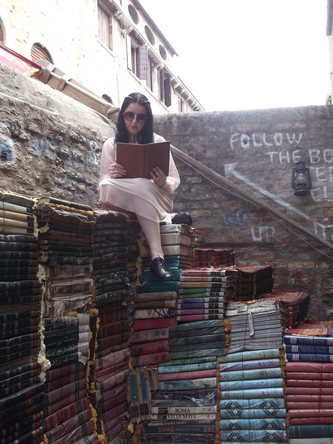 Melinda Salisbury lives by the sea, somewhere in the south of England. As a child she genuinely thought Roald Dahl’s Matilda was her biography, in part helped by her grandfather often mistakenly calling her Matilda, and the local library having a pretty cavalier attitude to the books she borrowed. Sadly she never manifested telekinetic powers. She likes to travel, and have adventures. She also likes medieval castles, non-medieval aquariums, Richard III, and all things Scandinavian The Sin Eater's Daughter is her first novel. She can be found on Twitter at @MESalisbury, though be warned, she tweets often.

The Sin Eater's Daughter (The Sin Eater’s Daughter, #1)
Sixteen-year-old Twylla lives in the castle. But although she's engaged to the prince, no one speaks to her. No one even looks at her. Because Twylla isn't a member of the court. She's the executioner. As the goddess-embodied, Twylla kills with a single touch. So each week, she's taken to the prison and forced to lay her hands on those accused of treason. No one will ever love her. Who could care for a girl with murder in her veins? Even the prince, whose royal blood supposedly makes him immune to her touch, avoids her.

But then a new guard arrives, a boy whose playful smile belies his deadly swordsmanship. And unlike the others, he's able to look past Twylla's executioner robes and see the girl, not the goddess. Yet a treasonous romance is the least of Twylla's problems. The queen has a plan to destroy her enemies-a plan that requires an unthinkable sacrifice. Will Twylla do what it takes to protect her kingdom? Or will she abandon her duty in favor of a doomed love?
02

The Sleeping Prince (The Sin Eater’s Daughter, #2)
Return to the darkly beautiful world of The Sin Eater's Daughter with a sequel that will leave you awed, terrified . . . and desperate for more.

Ever since her brother Lief disappeared, Errin's life has gone from bad to worse. Not only must she care for her sick mother, she has to scrape together rent money by selling illegal herbal cures. But none of that compares to the threat of the vengeful Sleeping Prince whom the Queen just awoke from his enchanted sleep.

When her village is evacuated as part of the war against the Sleeping Prince, Errin is left desperate and homeless. The only person she can turn to is the mysterious Silas, a young man who buys deadly poisons from Errin, but won't reveal why he needs them. Silas promises to help her, but when he vanishes, Errin must journey across a kingdom on the brink of war to seek another way to save her mother and herself. But what she finds shatters everything she believed about her world, and with the Sleeping Prince drawing nearer, Errin must make a heartbreaking choice that could affect the whole kingdom.
03

The Scarecrow Queen (The Sin Eater’s Daughter, #3)
The final battle is coming . . .

As the Sleeping Prince tightens his hold on Lormere and Tregellan, the net closes in on the ragged band of rebels trying desperately to defeat him. Twylla and Errin are separated, isolated, and running out of time. The final battle is coming, and Aurek will stop at nothing to keep the throne forever . . .

Explosive, rich and darkly addictive, this is the stunning conclusion to Mel Salisbury's internationally best-selling trilogy that began with The Sin Eater's Daughter.
04

State of Sorrow (Sorrow, #1)
Sorrow - for that is all she brings us.

A people laid low by grief and darkness.
A cut-throat race for power and victory.
A girl with everything and nothing to lose…

By day, Sorrow governs the Court of Tears, covering for her grief-maddened father, who has turned their once celebrated land into a living monument for the brother who died before she was born.

By night, she seeks solace in the arms of the boy she's loved since childhood. But one ghost won't stop haunting her, and when enemies old and new close ranks against her, Sorrow must decide how far she's willing to go to win...

Be swept away by the dark and dangerous new world from Melinda Salisbury, bestselling author of The Sin Eater's Daughter trilogy
05

Hold Back the Tide
Everyone knows what happened to Alva's mother, all those years ago. But when dark forces begin to stir in Ormscaula, Alva has to face a very different future - and question everything she thought she knew about her past...

Unsettling, sharply beautiful and thought-provoking, HOLD BACK THE TIDE is the new novel from Melinda Salisbury, bestselling author of The Sin Eater's Daughter trilogy.
06

Sorrow Ventaxis has won the election, and in the process lost everything...

Governing under the sinister control of Vespus Corrigan, and isolated from her friends, Sorrow must to find a way to free herself from his web and save her people. But Vespus has no plans to let her go, and he isn't the only enemy Sorrow faces as the curse of her name threatens to destroy her and everything she's fought for.
07

The King of Rats (The Sin Eater's Daughter, #0.5)
Five hundred years ago, Tallith was a utopia, populated by a proud and privilged people, none more so than Crown Prince Aurek, and his twin sister Aurelia. With their golden eyes and silver hair, the twins were the jewel in the crown of the realm, light and dark, night and day. The bright future of Tallith seemed assured in their hands.

But then the rats came.

From across the seas, they summon the rat catcher, desperate to rid their people of the plague attacking the very heart of Tallith. But the rat catcher brings with him more than just his trade; a beautiful daughter who will bow to no man. And when prince Aurek decides he will have her, come what may, he sets in motion a chain of events that will reshape the world for centuries to come...

A companion story to The Sin Eater's Daughter series.
08

The Heart Collector
A selection of three companion stories to the Sin Eater's Daughter series. When rats invade golden Tallith, the king summons a rat catcher from across the seas. But the rat catcher brings with him more than just his trade; a beautiful daughter who will bow to no man. And when Prince Aurek decides he wants her, he triggers a chain of events that will reshape the world for centuries to come... A boy wakes up in the ruins of a castle, the prone body of a white-haired man on a bier beside him... He is the Bringer, the Heart Collector, cursed to return every one hundred years to seek out the heart that will wake his father forever. And this time the girl he finds might just be the one... Once upon a time, in a land of gold and glory, a baby boy was born to a beautiful woman, and a wealthy man. His parents called him Mulgreen Grey, and he was destined to live a fairy-tale life; adored, envied, and wanting for nothing. But not every fairytale has a happy ever after...
09

The Sin Eater's Daughter: Free Preview Edition
This sneak peek of THE SIN EATER'S DAUGHTER will lure you into a world more beautiful and twisted than anything you can imagine, leaving you awed, terrified . . .and desperate for more.

17-year-old Twylla lives in the castle. But although she's engaged to the prince, Twylla isn't exactly a member of the court.

As the Goddess embodied, Twylla instantly kills anyone she touches. Each week, she's taken to the prison and forced to lay her hands on those accused of treason. Even the prince, whose royal blood supposedly makes him immune to Twylla's fatal touch, avoids her company.

But then a new guard arrives, a boy whose easy smile belies his deadly swordsmanship. And unlike the others, he's able to look past Twylla's executioner robes and see the girl, not the Goddess. Yet Twylla's been promised to the prince, and knows what happens to people who cross the queen.

However, the queen has a plan to destroy her enemies, a plan that requires a stomach-churning, unthinkable sacrifice. Will Twylla do what it takes to protect her kingdom? Or will she abandon her duty in favor of a doomed love?
10