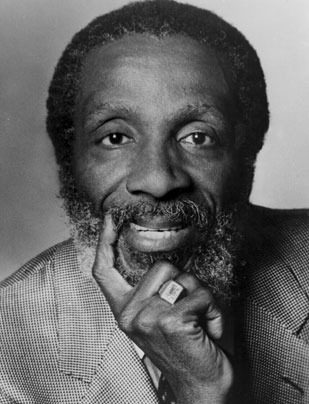 Dick Gregory is the author of books: Nigger, The Most Defining Moments in Black History According to Dick Gregory, Callus on My Soul, Dick Gregory's Natural Diet for Folks Who Eat: Cookin' with Mother Nature, From the Back of the Bus, The Shadow That Scares Me, No More Lies, Write Me In!, Up from Nigger, Dick Gregory's Bible Tales, With Commentary

Nigger
"Good evening, ladies and gentlemen. I understand there are a good many Southerners in the room tonight. I know the South very well. I spent twenty years there one night..."
02

The Most Defining Moments in Black History According to Dick Gregory
With his trademark acerbic wit, incisive humor, and infectious paranoia, one of our foremost comedians and most politically engaged civil rights activists looks back at 100 key events from the complicated history of black America.

A friend of luminaries including Dr. Martin Luther King, Jr. and Medgar Evers, and the forebear of today’s popular black comics, including Larry Wilmore, W. Kamau Bell, Damon Young, and Trevor Noah, Dick Gregory has been a provocative and incisive cultural force for more than fifty years. As an entertainer, he has always kept it indisputably real about race issues in America, fearlessly lacing laughter with hard truths. As a leading activist against injustice, he marched at Selma during the Civil Rights movement, organized student rallies to protest the Vietnam War; sat in at rallies for Native American and feminist rights; fought apartheid in South Africa; and participated in hunger strikes in support of Black Lives Matter.

In this collection of thoughtful, provocative essays, Gregory charts the complex and often obscured history of the African American experience. In his unapologetically candid voice, he moves from African ancestry and surviving the Middle Passage to the creation of the Jheri Curl, the enjoyment of bacon and everything pig, the headline-making shootings of black men, and the Black Lives Matter movement. A captivating journey through time, The Most Defining Moments in Black History According to Dick Gregory explores historical movements such as The Great Migration and the Harlem Renaissance, as well as cultural touchstones such as Sidney Poitier winning the Best Actor Oscar for Lilies in the Field and Billie Holiday releasing Strange Fruit.

An engaging look at black life that offers insightful commentary on the intricate history of the African American people, The Most Defining Moments in Black History According to Dick Gregory is an essential, no-holds-bar history lesson that will provoke, enlighten, and entertain.
03

Callus on My Soul
A comedian, actor, civil rights activity and nutrition guru, Gregory is renowned for his biting satire. Now, more than 30 years after his bestselling book "Nigger, " Gregory has put his provocative life story down on paper, recounting his unique experience and discussing a host of other luminaries--from Rosa Parks to Hugh Hefner. 25 photos.
04

Written with Dick Gregory’s irreverent wit and informed by his deep intelligence, Dick Gregory’s Natural Diet for Folks Who Eat is for real people who are concerned about their health and wellness. Gregory offers an enlightening introduction to natural foods, and offers a wickedly amusing and informative assessment of how our modern diet damages the human digestive tract, and raises our consciousness about the political power of food.

Gregory argues that how you treat yourself and your body reflects how you treat others. He discusses various fasts and the ones he’s done for both political and health reasons, hunger in America, navy beans, and how Americans are changing the way they eat—the beginning of a movement in the 1970s that is still felt today. He offers suggestions on diets to help you gain or lose pounds and offers advice on natural substitutes for favorite alcoholic drinks. You are what you eat—with Dick Gregory’s Natural Diet for Folks Who Eat you can laugh your way to better health.
05

From the Back of the Bus
Dick Gregory is a comedian, social satirist, Negro, pioneer. In little more than a year he has climbed from $10 a day car washer to $5000 a week headlinerdoing what some said he shouldn't do, most said he couldn't do, but what Gregory knows he must do -- tell the truth about segregation so that it brings smiles instead of hurt, and insight, even to the insensitive. His method: "Once I get them laughing, I can say anything."
06

The Shadow That Scares Me
Here is the Dick Gregory of the devastating wit and pointed humor known to millions. Here, too, is the impassioned social reformer, speaking out on such subjects as respect for law, order and justice; violence and police brutality; the breakdown of Negro families; civil disobedience and other vital issues [excerpted from back cover blurb]
07

Write Me In!
Published during Gregory's 1968 run for US president: " . . . the traditional Easter Egg roll on the White House lawn will be replaced by a watermelon roll . . . all White House invitations will be handled by Eartha Kitt . . .".
09