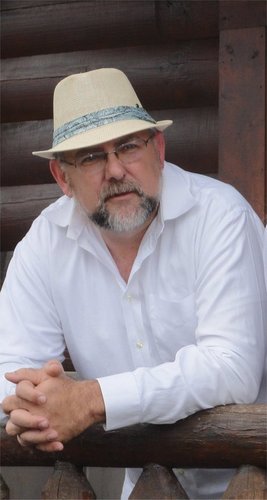 I live in sunny Florida where I spend my days taxiing the family to various places while jotting down the many crazy thoughts inside my head. I enjoy a freelance career writing for several magazines sharing some of my interesting viewpoints on life and those around me. I can usually be found on my back porch watching the squirrels chittering at the birds while enjoying a cigar, a scotch, and the many characters that talk to me inside my head.

Behind the Mask
Fantasies, we all have them, but Emma Rochester craved for hers to come true. She's been dreaming of Trent's Halloween part for over a year and she finally received her invite. Yet, now there's Jacob Hendricks, the quiet, mysterious man at work who keeps casting furtive glances her way. In order to have one, she has to give up on the other, but which should she choose.
03

Alpha Rising (Bull Creek Chronicles #1)
Three alphas, each with their own agenda, but all wanting to rule Bull Creek.

Disenfranchised with his family, Dimitri Everest is tired of his father making his life decisions for him, especially after watching his brother, Fitz, get railroaded into an arranged mating. Now, Dimitri's ready to leave the paranormal town of Draven Falls, but where will he go? He's never left home before? And what about his sister, Lainie? Could he really leave her behind?

Neal Porter has found his destined mate, but the intoxicating pull of the call has blinded him to his true calling - alpha of Bull Creek. However, humans and witches are being driven from their homes, and the Paranormal Council back in Draven Falls wants Neal replaced, and now, they think they've found the perfect candidate. If only he will agree to leaving home.

However, there's a third alpha who has ruled the small town from the shadows, and he has no intention of releasing his hold on Bull Creek. He'll stop at nothing until the humans are run off and Neal Porter is firmly under his thumb.

Three alphas want to rule Bull Creek, but only one can come out on top. Will Dimitri be able to bring order back to a town ruled by chaos?
05

April's Fool (Black Hollow #13)
The time for clowning around is over as Professor Compton's Phantom Circus arrives in Black Hollow.

April McCray merely wants to enjoy spring break, avoiding the crowds of rambunctious children attending the circus. However, the Powers That Be yank her banshee from her peaceful evening, shoving her into the nightmare of a dark-haired stranger as she tries to warn him of a loved one's soon demise. Once she's safely back in her own home, April can't stop thinking about the man with the pale-red eyes.

Wyatt Compton refuses to be anyone's fool, especially whoever is murdering his family. He has to uncover the killer before he strikes again, this time killing Wyatt's grandfather, but how can he do that among a group of shapeshifters?

The circus comes to Black Hollow, bringing a killer along with it, thrusting April and Wyatt together in a race to save his grandfather. Can they stop whoever desires to kill the ringmaster, or has the circus finally met its end?
07

My Lover's Mate (Destined Mates #4)
A woman lost, a groom rejected, and a shifter deceived.

Noel Hastings didn't mean to fall in love when she moved to Bull Creek, romance being far from her mind. She craved knowledge, instead, answers about the paranormal world, a world thrust in her face, scaring her into running away from her home.

Wes Stapleton knew Noel had secrets. After all, everyone in Bull Creek had secrets. He was willing, however, to wait until she was ready to share what she kept guarded in her heart. He loved her enough that her secrets, whatever they were, didn't matter.

That was before her secrets walked into Everglades demanding to know why Noel had run away from the altar and her future husband.
08

Come Halloween (Halloween Seduction #1)
Kelly Ginsberg's husband, Jared, died two years ago in a motorcycle accident. On her way to visit his grave one night, she stumbled across a way to bring him back from the dead on the anniversary of his death and the witch who could help her make it happen. Yet, where does that leave Derek Cranston and the attraction blooming between them?

Blades of Sass (Sassy Ever After Kindle Worlds; Sanctuary of Bull Creek #2)
Eve Hartlow moved to Bull Creek to hide from an abusive ex-boyfriend, happy with the quiet life she etched out for herself. A human among paranormals, she keeps a knife at her waist, not for protection against her neighbors, but against her past.

Arlin Landry made a fatal mistake in Blue Creek one night at the Wolfe's Den, a mistake that cost a man is his life. Now, forced to leave town until the heat dies down, he visits his brother in Bull Creek, a brother who just so happens to be somewhere else. He's content to kick back and relax in the quiet setting, putting his action back home out of his mind.

However, Eve's past finds her and Arlin's tiger won't permit him to look away. Will he make the same mistake he made in Blue Creek?

Panther Hunted (Bull Creek Chronicles #2)
A mate denied. A new chapter begun. Escape, however, is but an illusion.

Lainie Everest refused to be a pawn in her father's selfish schemes, and the only way to escape the forced mating he has planned is to join her brother in the paranormal town of Bull Creek. Eager to start a new chapter in her life, she leaves Draven Falls, her father's unscrupulous plans, and the man she refused to marry behind. Yet, while she never looked back, she should have kept looking over her shoulder.

A promise was made to Miles Hemingway, a deal brokered by Daniel Everest for his daughter's hand. Lainie, however, believes she can simply run away from Miles, breaking that promise. Escape is not that easy, though. He will have what was promised, even if Lainie has to become a PANTHER HUNTED.