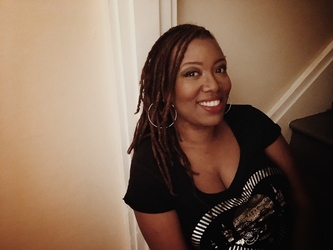 Deesha Philyaw's collection of short stories about Black women, sex, and the Black church, THE SECRET LIVES OF CHURCH LADIES is forthcoming from West Virginia University Press in Sept. 1, 2020. Deesha is the co-author of Co-Parenting 101: Helping Your Kids Thrive in Two Households After Divorce, written in collaboration with her ex-husband. Her work has been listed as Notable in the Best American Essays series, and her writing on race, parenting, gender, and culture has appeared in The New York Times, The Washington Post, McSweeney’s, The Rumpus, Brevity, dead housekeeping, Apogee Journal, Catapult, Cheat River Review, TueNight, ESPN’s The Undefeated and The Baltimore Review; Essence, Ebony, and Bitch magazines; and various anthologies. Deesha is a Fellow at the Kimbilio Center for African American Fiction and a past Pushcart Prize nominee for essay writing in Full Grown People.

Deesha Philyaw is the author of books: The Secret Lives of Church Ladies, Co-parenting 101: Helping Your Kids Thrive in Two Households after Divorce, So S/He Had An Affair: Writing to Keep From Losing Your Sh*t, When We Were Free to Be: Looking Back at a Children's Classic and the Difference It Made, CHUTZ-POW! Superheroes of the Holocaust, Volume Three: The Young Survivors, Soul Mate 101 and Other Essays on Love and Sex, TENDER a literary anthology and book of spells: evidence

The Secret Lives of Church Ladies
The Secret Lives of Church Ladies explores the raw and tender places where black women and girls dare to follow their desires and pursue a momentary reprieve from being good. The nine stories in this collection feature four generations of characters grappling with who they want to be in the world, caught as they are between the church's double standards and their own needs and passions
02

Co-parenting 101: Helping Your Kids Thrive in Two Households after Divorce
A successful co-parenting relationship is as vital to your child's well-being and health as nutritious food or proper exercise. Research, anecdotal evidence, and plain common sense all point to the fact that children are happier, healthier, and better adjusted when both of their parents play an active role in their lives. Studies also show that the trauma children experience in the wake of a divorce or separation can be lessened when they see their parents getting along. Kids whose parents successfully co-parent feel more secure than those who have limited or no connection to one of their parents post divorce.

Co-Parenting 101 is based on the premise that co-parenting is a must, not an option. The involvement of both parents—not just the primary guardian—is the cornerstone of successful co-parenting. This is the first book written by a formerly married couple for whom co parenting is central to their day to day lives, and it offers a comprehensive, personal, and upfront look at how to effectively raise kids with an ex-spouse.

Authors Deesha Philyaw and Michael D. Thomas, the creators of the popular co-parenting website, coparenting101.org, share their own experiences raising their children together, as well as provide professional advice from co-parenting experts. Through practical tips combined with expert parental strategies, this book a great resource for divorced parents with children.

For parents, less time stressed out about legal wrangling means more time to be fully present and engaged with the children. By learning to put their animosity aside, parents can focus on putting their kids first.
03

So S/He Had An Affair: Writing to Keep From Losing Your Sh*t
Here's the thing: If you've discovered (or were told) that your spouse had an affair, you've probably already lost your sh*t. Or you're going to, but it just hasn't happened yet. This book is a survival guide for women who have ultimately decided (or whose spouse has decided) to divorce, after their partner's affair. We offer the writing exercises in this workbook as a pathway toward healing and regrouping.
04

When We Were Free to Be: Looking Back at a Children's Classic and the Difference It Made
If you grew up in the era of mood rings and lava lamps, you probably remember "Free to Be . . . You and Me"--the groundbreaking children's record, book, and television special that debuted in 1972. Conceived by actress and producer Marlo Thomas and promoted by "Ms." magazine, it captured the spirit of the growing women's movement and inspired girls and boys to challenge stereotypes, value cooperation, and respect diversity. In this lively collection marking the fortieth anniversary of "Free to Be . . . You and Me," thirty-two contributors explore the creation and legacy of this popular children's classic.

Featuring a prologue by Marlo Thomas, "When We Were Free to Be" offers an unprecedented insiders' view by the original creators, as well as accounts by activists and educators who changed the landscape of childhood in schools, homes, toy stores, and libraries nationwide. Essays document the rise of non-sexist children's culture during the 1970s and address how "Free to Be" still speaks to families today.

CHUTZ-POW! Superheroes of the Holocaust, Volume Three: The Young Survivors
06

Soul Mate 101 and Other Essays on Love and Sex
What does love look like in adulthood? Sometimes many splendored, often mucho complicated.

“These essays sizzle with urgency, honesty, lust, and release. I’m not sure I’ve ever read a collection where all the essayists bare themselves with such profound vulnerability. Here we are reminded of our first crushes, our first mistakes, and our repeated attempts to navigate toward the best versions of ourselves. Jennifer Niesslein has created a far-ranging anthology that showcases talented essayists doing what we all do: grapple with the leaps we’ve made and the lengths we’ll go to outrun the falls.”

—Jill Talbot, the author of The Way We Weren’t: A Memoir

"Everyone has a story to tell, and when those individual stories are told well they transcend the particular. In Soul Mate 101, each story of love lost and love found, of sexual desire and spiritual connection, becomes universal. Here, desire evolves—or doesn’t—sometimes years after it begins as puppy love. These 21 outstanding writers explore love and sex in language whose rhythm ranges from sensuous to urgent. Soul Mate 101 is an advanced class in the longings of the human heart."

TENDER a literary anthology and book of spells: evidence
This collection of poetry, prose and art by 19 Black womxn and femmes in Pittsburgh grew out of a longing for connection and comfort in a city and a world that is not always tender toward them. The book is a balm they made for themselves. The book is co-edited by vanessa german and Deesha Philyaw.

TENDER is brought to you by late-night conversations among Black womxn and femmes telling our stories, talking about us, loving on us. Conversations of reckoning and consideration of the heart and the soul and how we are living with ourselves, friends, family and lovers, through times of stress and social media and false media. This book is brought to you by healing hands, prayers, loud laughter, and freestyles.