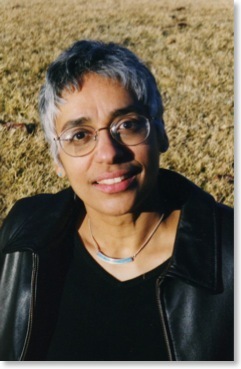 Vaunda Micheaux Nelson loves bringing books and children together and feels lucky to have two careers that foster this. The children's librarian and author says, "It was destined from the day I was born. My mother found my name in a novel she was reading."

Vaunda's first book, Always Gramma, was selected by the Children's Book Council as a Notable Children's Trade Book in the Field of Social Studies. Mayfield Crossing won the Georgia Children's Book in 1995, and Beyond Mayfield received a 1999 Parents' Choice Gold Award. Almost to Freedom, her most recent title, received a Coretta Scott King Honor for illustration in 2004. In addition, Vaunda's poetry has been published in Cricket and Cicada magazines.

Vaunda has been a teacher, newspaper reporter, bookseller, school librarian, and twice a member of the Newbery Award Committee. She holds master's degrees from The Bread Loaf School of English at Middlebury College, Vermont, and from the University of Pittsburgh School of Library and Information Science. Her memberships include the SCBWI, the American Library Association and the Association for Library Service to Children. The Pennsylvania native is currently the young adult librarian at a public library in New Mexico, where she lives with her husband, Drew, and two cats.

Bad News for Outlaws: The Remarkable Life of Bass Reeves, Deputy U. S. Marshal
Sitting tall in the saddle, with a wide-brimmed black hat and twin Colt pistols on his belt, Bass Reeves seemed bigger than life. Outlaws feared him.

As a deputy U.S. Marshal and former slave who escaped to freedom in the Indian Territories, Bass was cunning and fearless. When a lawbreaker heard Bass Reeves had his warrant, he knew it was the end of the trail, because Bass always got his man, dead or alive. He achieved all this in spite of whites who didn't like the notion of a black lawman.

For three decades, Bass was the most feared and respected lawman in the territories. He made more than 3,000 arrests, and though he was a crack shot and a quick draw, he only killed fourteen men in the line of duty. Bad News for Outlaws reveals the story of a remarkable African American hero of the Old West.
02

The Book Itch: Freedom, Truth & Harlem's Greatest Bookstore
Lewis's dad said he had an itch he needed to scratch -- a book itch. How to scratch it? He started the National Memorial African Bookstore. It became a center of black culture and a home to activists like Malcolm X.
03

No Crystal Stair: A Documentary Novel of the Life and Work of Lewis Michaux, Harlem Bookseller
Coretta Scott King award-winning author Vaunda Micheaux Nelson's great uncle was Lewis Micheaux, owner of the famous National Memorial African Bookstore. Located in the heart of Harlem, New York, from 1939 to 1975, Micheaux's bookstore became the epicenter of black literary life and a rallying point for the Black Nationalist movement. Some of its famous and most loyal patrons include Malcolm X, Muhammad Ali, Langston Hughes, and W.E.B. DuBois. In this inspiring work of historical fiction, Nelson tells the true story of a man with a passion for knowledge and of a bookstore whose influence has become legendary.
04

Almost to Freedom
Lindy and her doll Sally are best friends - wherever Lindy goes, Sally stays right by her side. They eat together, sleep together, and even pick cotton together. So, on the night Lindy and her mama run away in search of freedom, Sally goes too. This young girl's rag doll vividly narrates her enslaved family's courageous escape through the Underground Railroad. At once heart-wrenching and uplifting, this story about friendship and the strength of the human spirit will touch the lives of all readers long after the journey has ended.
05

Don't Call Me Grandma
Nell isn't your typical great-grandmother. But in the course of this picture book from Coretta Scott King Award-winning author Vaunda Michaux Nelson, a young girl finds a way to express her affection for this prickly, independent woman.
06

Let 'er Buck!: George Fletcher, the People's Champion
In 1911, three men were in the final round of the famed Pendleton Round-Up. One was white, one was Indian, and one was black. When the judges declared the white man the winner, the audience was outraged. They named black cowboy George Fletcher the "people's champion" and took up a collection, ultimately giving Fletcher far more than the value of the prize that went to the official winner. Award-winning author Vaunda Micheaux Nelson tells the story of Fletcher's unlikely triumph with a Western twang that will delight kids--and adults--who love true stories, unlikely heroes, and cowboy tales.
07

Juneteenth
June 19th, 1865, began as another hot day in Texas. Enslaved African Americans worked in fields, in barns, and in the homes of the white people who owned them. Then a message arrived. Freedom! Slavery had ended! The Civil War had actually ended in April. It took two months for word to reach Texas. Still the joy of that amazing day has never been forgotten. Every year, people all over the United States come together on June 19th to celebrate the end of slavery. Join in the celebration of Juneteenth, a day to remember and honor freedom for all people.
08

Who Will I Be, Lord?
A lyrical story about how looking back is helpful when you start looking forward. . . .

A young girl thoughtfully considers her family tree and the vibrant ancestors who populate it. As each family member’s story is revealed, her quiet meditation—about what kind of person she’ll be when she grows up—transforms into a testament to the importance of sharing family stories.

Ready? Set. Raymond!
Raymond likes to do everything fast–from brushing his teeth to going to school to making new friends. In three easy-to-read stories, readers follow Raymond on a typical super-fast day, see him make a new friend, and run a race!
10

Young readers can now learn about one of the greatest civil rights leaders of all time, Dr. Martin Luther King, Jr., in this Level 3 Step into Reading Biography Reader. Set against Dr. King’s historic march on Washington in the summer of 1963, a moving story and powerful illustrations combine to illuminate not only one of America’s most celebrated leaders, but also one of America’s most celebrated moments.

Step 3 Readers feature engaging characters in easy-to-follow plots about popular topics. For children who are ready to read on their own.

Series Overview: Since 1984, Step into Reading has set the standard. Random House was the first trade publisher to implement a leveling system that recognized the developmental stages of beginning readers; offer a reader series as original paperbacks; and publish a mix of original and licensed titles. The line includes exciting fiction and non-fiction, favorite characters and innovative line extensions such as Non-Fiction Readers, Comic Readers, Math Readers, Phonics Readers, and Sticker Books: a complete literacy program with something for every child.