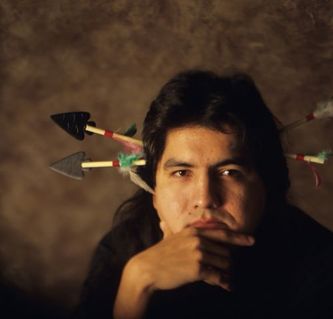 Sherman J. Alexie, Jr., was born in October 1966. A Spokane/Coeur d'Alene Indian, he grew up on the Spokane Indian Reservation in Wellpinit, WA, about 50 miles northwest of Spokane, WA. Alexie has published 18 books to date.
Alexie is an award-winning and prolific author and occasional comedian. Much of his writing draws on his experiences as a modern Native American. Sherman's best known works include The Lone Ranger and Tonto Fistfight in Heaven, Smoke Signals, and The Absolutely True Diary of a Part-Time Indian. He lives in Seattle, Washington.

Sherman Alexie is the author of books: The Absolutely True Diary of a Part-Time Indian, The Lone Ranger and Tonto Fistfight in Heaven, Flight, You Don't Have to Say You Love Me, Reservation Blues, The Toughest Indian in the World, War Dances, Ten Little Indians, Indian Killer, Thunder Boy Jr.

The Absolutely True Diary of a Part-Time Indian
Bestselling author Sherman Alexie tells the story of Junior, a budding cartoonist growing up on the Spokane Indian Reservation. Determined to take his future into his own hands, Junior leaves his troubled school on the rez to attend an all-white farm town high school where the only other Indian is the school mascot.

Heartbreaking, funny, and beautifully written, The Absolutely True Diary of a Part-Time Indian, which is based on the author's own experiences, coupled with poignant drawings by Ellen Forney that reflect the character's art, chronicles the contemporary adolescence of one Native American boy as he attempts to break away from the life he was destined to live.

The Lone Ranger and Tonto Fistfight in Heaven
In this darkly comic short story collection, Sherman Alexie, a Spokane/Coeur d'Alene Indian, brilliantly weaves memory, fantasy, and stark realism to paint a complex, grimly ironic portrait of life in and around the Spoke Indian Reservation. These 22 interlinked tales are narrated by characters raised on humiliation and government-issue cheese, and yet are filled with passion and affection, myth and dream. There is Victor, who as a nine-year-old crawled between his unconscious parents hoping that the alcohol seeping through their skins might help him sleep. Thomas Builds-the-Fire, who tells his stories long after people stop listening, and Jimmy Many Horses, dying of cancer, who writes letters on stationary that reads "From the Death Bed of James Many Horses III," even though he actually writes them on his kitchen table. Against a backdrop of alcohol, car accidents, laughter, and basketball, Alexie depicts the distances between Indians and whites, reservation Indians and urban Indians, men and women, and most poetically, between modern Indians and the traditions of the past.
03

Flight
Sherman Alexie is one of our most gifted and accomplished storytellers and a treasured writer of huge national stature. His first novel in ten years is the hilarious and tragic portrait of an orphaned Indian boy who travels back and forth through time in a charged search for his true identity. With powerful and swift, prose, Flight follows this troubled foster teenager--a boy who is not a "legal" Indian because he was never claimed by his father--as he learns that violence is not the answer.

The journey for Flight's young hero begins as he's about to commit a massive act o violence. At the moment of decision, he finds himself shot back through time to resurface in the body of an FBI agent during the civil rights era, where he sees why "Hell is Re driver, Idaho, in the 1970s." Red River is only the first stop in an eye-opening trip through moments in American history. He will continue traveling back to inhabit the body of an Indian child during the battle at Little Bighorn and then ride with an Indian tracker in the nineteenth century before materializing as an airline pilot jetting through the skies today. During these furious travels through time, his refrain grows: "Who's to judge?" and "I don't understand humans." When finally, blessedly, our young warrior comes to rest again in his own life, he is mightily transformed by all he has seen.

This is Sherman Alexie at his most brilliant--making us laugh while he's breaking our hearts. Time Out has said that "Alexie, like his characters, is on a modern-day vision quest," and in Flight he seeks nothing less than an understanding of why human beings hate. Flight is irrepressible, fearless, and groundbreaking Alexie.
04

You Don't Have to Say You Love Me
A searing, deeply moving memoir about family, love, and loss from the critically acclaimed, bestselling National Book Award winner.

When his mother passed away at the age of 78, Sherman Alexie responded the only way he knew how: he wrote. The result is this stunning memoir. Featuring 78 poems, 78 essays and intimate family photographs, Alexie shares raw, angry, funny, profane, tender memories of a childhood few can imagine--growing up dirt-poor on an Indian reservation, one of four children raised by alcoholic parents. Throughout, a portrait emerges of his mother as a beautiful, mercurial, abusive, intelligent, complicated woman. You Don't Have To Say You Love Me is a powerful account of a complicated relationship, an unflinching and unforgettable remembrance.
05

Reservation Blues
The life of Spokane Indian Thomas Builds-the-Fire irrevocably changes when blues legend Robert Johnson miraculously appears on his reservation and passes the misfit storyteller his enchanted guitar. Inspired by this gift, Thomas forms Coyote Springs, an all-Indian Catholic band who find themselves on a magical tour that leads from reservation bars to Seattle and New York--and deep within their own souls.
06

The Toughest Indian in the World
A beloved American writer whose books are championed by critics and readers alike, Sherman Alexie has been hailed by Time as "one of the better new novelists, Indian or otherwise."

In these stories, we meet the kind of American Indians we rarely see in literature -- the kind who pay their bills, hold down jobs, fall in and out of love.

A Spokane Indian journalist transplanted from the reservation to the city picks up a hitchhiker, a Lummi boxer looking to take on the toughest Indian in the world. A Spokane son waits for his diabetic father to come home from the hospital, tossing out the Hershey Kisses the father has hidden all over the house. An estranged interracial couple, separated in the midst of a traffic accident, rediscover their love for each other. A white drifter holds up an International House of Pancakes, demanding a dollar per customer and someone to love, and emerges with $42 and an overweight Indian he dubs Salmon Boy.

Sherman Alexie's voice is one of remarkable passion, and these stories are love stories -- between parents and children, white people and Indians, movie stars and ordinary people. Witty, tender, and fierce, The Toughest Indian in the World is a virtuoso performance by one of the country's finest writers.
07

War Dances
In his first new fiction since winning the National Book Award for The Absolutely True Diary of a Part-Time Indian, best-selling author Sherman Alexie delivers a virtuoso collection of tender, witty, and soulful stories that expertly capture modern relationships from the most diverse angles. War Dances brims with Alexie’s poetic and revolutionary prose, and reminds us once again why he ranks as one of our country’s finest writers.

With bright insight into the minds of artists, entrepreneurs, fathers, husbands, and sons, Alexie populates his stories with average men on the brink of exceptional change: In the title story, a son recalls his father’s “natural Indian death” from alcohol and diabetes, just as he learns that he himself may have a brain tumor; “The Ballad of Paul Nonetheless,” dissects a vintage clothing store owner’s failing marriage and courtship of a Puma-clad stranger in airports across the country; and “Breaking and Entering” recounts a film editor’s fateful confrontation with an thieving adolescent.

Brazen and wise War Dances takes us to the heart of what it means to be human. The new beginnings, successes, mistakes, and regrets that make up our daily lives are laid bare in this wide-ranging new work that is quintessential.
08

Ten Little Indians
Sherman Alexie offers nine poignant and emotionally resonant stories about Native Americans who find themselves at personal and cultural crossroads. In 'The Life and Times of Estelle Walks Above', an intellectual feminist Spokane Indian woman saves the lives of dozens of white women all around her, to the bewilderment of her only child. In 'Do You Know Where I Am?' two college sweethearts rescue a lost cat - a simple act that has profound moral consequences for the rest of their lives together. In 'What You Pawn I Will Redeem', a homeless Indian man must raise $1,000 in twenty-four hours to buy back the fancy dance outfit stolen from his grandmother fifty years earlier.

Even as they often make us laugh, Sherman Alexie's stories are driven by a haunting lyricism and naked candour that cut to the heart of the human experience.
09

Indian Killer
A gritty, smart thriller from a literary superstar

A killer has Seattle on edge. The serial murderer has been dubbed “the Indian Killer” because he scalps his victims and adorns their bodies with owl feathers. As the city consumes itself in a nightmare frenzy of racial tension, a possible suspect emerges: John Smith. An Indian raised by whites, John is lost between cultures. He fights for a sense of belonging that may never be his—but has his alienation made him angry enough to kill? Alexie traces John Smith’s rage with scathing wit and masterly suspense.

In the electrifying Indian Killer, a national bestseller and New York Times Notable Book, Sherman Alexie delivers both a scintillating thriller and a searing parable of race, identity, and violence.
10

Thunder Boy Jr. wants a normal name...one that's all his own. Dad is known as big Thunder, but little thunder doesn't want to share a name. He wants a name that celebrates something cool he's done like Touch the Clouds, Not Afraid of Ten Thousand Teeth, or Full of Wonder.

But just when Little Thunder thinks all hope is lost, dad picks the best name...Lightning! Their love will be loud and bright, and together they will light up the sky.