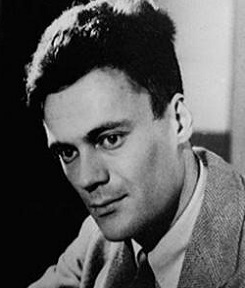 Robert Lowell, born Robert Traill Spence Lowell, IV, was an American poet whose works, confessional in nature, engaged with the questions of history and probed the dark recesses of the self. He is generally considered to be among the greatest American poets of the twentieth century.

His first and second books, Land of Unlikeness (1944) and Lord Weary's Castle (for which he received a Pulitzer Prize in 1947, at the age of thirty), were influenced by his conversion from Episcopalianism to Catholicism and explored the dark side of America's Puritan legacy.

Under the influence of Allen Tate and the New Critics, he wrote rigorously formal poetry that drew praise for its exceptionally powerful handling of meter and rhyme. Lowell was politically involved—he became a conscientious objector during the Second World War and was imprisoned as a result, and actively protested against the war in Vietnam—and his personal life was full of marital and psychological turmoil. He suffered from severe episodes of manic depression, for which he was repeatedly hospitalized.

Partly in response to his frequent breakdowns, and partly due to the influence of such younger poets as W. D. Snodgrass and Allen Ginsberg, Lowell in the mid-fifties began to write more directly from personal experience, and loosened his adherence to traditional meter and form. The result was a watershed collection, Life Studies (1959), which forever changed the landscape of modern poetry, much as Eliot's The Waste Land had three decades before.

Considered by many to be the most important poet in English of the second half of the twentieth century, Lowell continued to develop his work with sometimes uneven results, all along defining the restless center of American poetry, until his sudden death from a heart attack at age 60. Robert Lowell served as a Chancellor of The Academy of American Poets from 1962 until his death in 1977.

Collected Poems
Frank Bidart and David Gewanter have compiled the definitive edition of Robert Lowell's work, from his first, impossible-to-find collection, Land of Unlikeness; to the early triumph of Lord Weary's Castle, winner of the 1946 Pulitzer Prize; to the brilliant willfulness of his versions of poems by Sappho, Baudelaire, Rilke, Montale, and other masters in Imitations; to the late spontaneity of The Dolphin, winner of another Pulitzer Prize; to his last, most searching book, Day by Day. This volume also includes poems and translations never previously collected, and a selection of drafts that demonstrate the poet's constant drive to reimagine his work. Collected Poems at last offers readers the opportunity to take in, in its entirety, one of the great careers in twentieth-century poetry.
02

Life Studies and For the Union Dead
This popular volume collects two of Lowell's finest books of poetry.

Life Studies
Life Studies is the fourth book of poems by Robert Lowell. Most critics (including Helen Vendler, Steven Gould Axelrod, Adam Kirsch, and others) consider it one of Lowell's most important books, and the Academy of American Poets named it one of their Groundbreaking Books. Helen Vendler called Life Studies Lowell's "most original book." It won the National Book Award for Poetry in 1960.
04

Selected Poems
Selected Poems includes over 200 poems, culled from each of Robert Lowell's books of verse--Lord Weary's Castle, The Mills of the Kavanaughs, Life Studies, For the Union Dead, Near the Ocean, History, For Lizzie and Harriet, and The Dolphin. This edition, which first appeared in 1977, was revised by the author: there are additions, deletions, and a change in sequence in the Dolphin section; the five poems in the title sequence from Near the Ocean are now uncut; and a new poem is added to the "Nineteen Thirties."

For the Union Dead
For the Union Dead is a well-known 1964 poem by Robert Lowell, published in a book of the same name and originally written for the Boston Arts Festival in 1960 where Lowell first read it in public.The title references Allen Tate's 1928 poem "Ode to the Confederate Dead."

The setting of the poem is the Boston Common near the well-known Robert Gould Shaw Memorial. In the poem, Lowell's visit to the park leads to a series of associations that the dug-up park conjures. First, watching the construction of the underground parking garage beneath the Common makes him think about his childhood and how Boston had changed; in particular, the South Boston Aquarium that he'd visited as a child had recently been demolished in 1954.This leads him to think about the Robert Gould Shaw memorial and the history associated with the memorial (including Robert Gould Shaw and the all-black 54th Massachusetts Volunteer Infantry that he led). Finally, Lowell thinks of the then-controversial civil rights movement and the images of the integration of black and white schoolchildren that Lowell had recently seen on television.

The final lines of the poem, which read, "The Aquarium is gone. Everywhere,/ giant finned cars nose forward like fish;/ a savage servility/ slides by on grease" are particularly well-known for their rather dark description of the large American cars that were popular at the time.
06

Imitations
Not quite translations--yet something much more, much richer, than mere tributes to their original versions--the poems in Imitations reflect Lowell's conceptual, historical, literary, and aesthetic engagements with a diverse range of voices from the Western canon. Moving chronologically from Homer to Pasternak--and including such master poets en route as Baudelaire, Rimbaud, Rilke, and Montale--the fascinating and hugely informed pieces in this book are themselves meant to be read as "a whole," according to Lowell's telling Introduction, "a single volume, a small anthology of European poetry."
07

The Letters of Robert Lowell
One of the most influential poets of the twentieth century, Robert Lowell was also a prolific letter writer who corresponded with many of the remarkable writers and thinkers of his day, including Elizabeth Bishop, Ezra Pound, Hannah Arendt, William Carlos Williams, T. S. Eliot, Robert Frost, and Edmund Wilson. These letters, conversations in writing, document the evolution of Lowell's work and illuminate another side of the intimate life that was the subject of so many of his poems: his deep friendships with other writers; the manic-depressive illness he struggled to endure and understand; his marriages to three prose writers; and his engagement with politics and the antiwar movement of the 1960s. The Letters of Robert Lowell shows us, in many cases for the first time, the private thoughts and passions of a figure unrivaled in his influence on American letters.
10