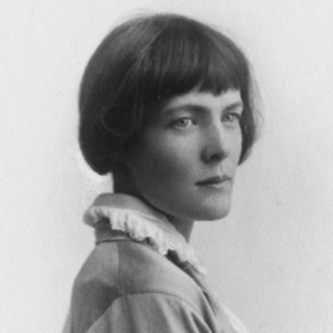 An innovative modernist writer, Hilda Doolittle (1886–1961) wrote under her initials in a career that stretched from 1909 to 1961. Although she is most well known for her poetry - lyric and epic - H.D. also wrote novels, memoirs, short stories, essays, reviews, a children’s book, and translations. An American woman who lived her adult life abroad, H.D. was engaged in the formalist experimentation that preoccupied much of her generation. A range of thematic concerns resonates through her writing: the role of the poet, the civilian representation of war, material and mythologized ancient cultures, the role of national and colonial identity, lesbian and queer sexuality, and religion and spirituality.

H.D. is the author of books: Collected Poems, 1912-1944, Trilogy: The Walls Do Not Fall / Tribute to the Angels / The Flowering of the Rod, Helen in Egypt, HERmione, Selected Poems, Sea Garden, Notes on Thought and Vision, Tribute to Freud: Writing on the Wall and Advent (New Directions Paperbook), Hermetic Definition: Poetry, The Gift: Novel

Collected Poems, 1912-1944
Of special significance are the "Uncollected and Unpublished Poems (1912-1944)," the third section of the book, written mainly in the 1930s, during H. D.'s supposed "fallow" period. As these pages reveal, she was in fact writing a great deal of important poetry at the time, although publishing only a small part of it. The later, wartime poems in this section form an essential prologue to her magnificent Trilogy (1944), the fourth and culminating part of this book. Born in Pennsylvania in 1886, Hilda Doolittle moved to London in 1911 in the footsteps of her friend and one-time fiancé Ezra Pound. Indeed it was Pound, acting as the London scout for Poetry magazine, who helped her begin her extraordinary career, penning the words "H. D., Imagiste" to a group of six poems and sending them on to editor Harriet Monroe in Chicago. The Collected Poems 1912-1944 traces the continual expansion of H. D.'s work from her early imagistic mode to the prophetic style of her "hidden" years in the 1930s, climaxing in the broader, mature accomplishment of Trilogy. The book is edited by Professor Louis L. Martz of Yale, who supplies valuable textual notes and an introductory essay that relates the significance of H. D.'s life to her equally remarkable literary achievement.
02

Trilogy: The Walls Do Not Fall / Tribute to the Angels / The Flowering of the Rod
As civilian war poetry (written under the shattering impact of World War II). Trilogy's three long poems rank with T.S. Eliot's "Four Quartets" and Ezra Pound's "Pisan Cantos." The first book of the Trilogy, "The Walls Do Not Fall," published in the midst of the "fifty thousand incidents" of the London blitz, maintains the hope that though "we have no map; / possibly we will reach haven,/ heaven." "Tribute to Angels" describes new life springing from the ruins, and finally, in "The Flowering of the Rod"—with its epigram "...pause to give/ thanks that we rise again from death and live."—faith in love and resurrection is realized in lyric and strongly Biblical imagery.
03

Selected Poems
Selected Poems, the first selection to encompass the rich diversity of Hilda Doolittle's poetry, is both confirmation and celebration of her long-overdue inclusion in the modernist canon. With both the general reader and the student in mind, editor Louis L. Martz of Yale University (who also edited H.D.'s Collected Poems 1912-1944) has provided generous examples of H.D.'s work. From her early "Imagist" period, through the "lost" poems of the thirties where H.D. discovered her unique creative voice, to the great prophetic poems of the war years combined in Trilogy, the selection triumphantly concludes with portions of the late sequences Helen in Egypt and Hermetic Definition which focus on rebirth, reconciliation, and the reunion of the divided self.
06

Sea Garden
This scarce antiquarian book is a facsimile reprint of the original. Due to its age, it may contain imperfections such as marks, notations, marginalia and flawed pages. Because we believe this work is culturally important, we have made it available as part of our commitment for protecting, preserving, and promoting the world's literature in affordable, high quality, modern editions that are true to the original work.
07

Notes on Thought and Vision
Notes on Thought and Vision by Imagist poet H.D. (Hilda Doolittle) is an aphoristic meditation on how one works toward an ideal body-mind synthesis; a contemplation of the sources of imagination and the creative process; and a study of gender differences H.D. believed to be inherent in women's and men's consciousness. Here, too, is The Wise Sappho, a lyrical tribute to the great poet of Lesbos, for whom H.D. felt deep personal kinship.

""Notes" is filled with dualisms that seem to split experience at all levels: body and spirit, womb and head, feeling and thought, the unconscious and ego consciousness, female and male, nature and divinity, classical and Christian, Greek and Hebrew, Greek and Egyptian, Sphinx and Centaur, Pan and Helios, Naiads and Athene, thistle and serpent. But the impulse behind "Notes" is to account for those mysterious moments in which the polarities seemed to fall away, or—more accurately—to find their contradictions lifted and subsumed into a gestalt that illuminated the cross-patch of the past and released her to the chances of the future." —Albert Gelpi, Introduction

"H. D.'s Notes on Thought and Vision [is] such a unique, inspiring, exploration of her notion of the creative process, orchestrated through an array of fully female, not feminine, not feminist, female figures." —Paul Kameen, University of Pittsburgh, English Department

Hilda "H.D." Doolittle (1886-1961) was a poet, novelist, and memoirist well-known for her role with the avant-gard Imagist group. Though born in Bethlehem, Pennsylvania, her publications took off in London and earned her a spot within the emerging Imagist movement. She is also known for being unapologetic about her sexuality and is an icon for LGBT rights and feminist movements.

Tribute to Freud: Writing on the Wall and Advent (New Directions Paperbook)
Bringing together Writing on the Wall composed some ten years after H.D.'s stay in Vienna, and Advent, a journal she kept at the time of her analysis there. Tribute to Freud offers a rare glimpse into the consulting room of the father of psychoanalysis. It may also be the most intimate of H.D.'s works.


Compelled by historical as well as personal crises, the poet worked with Freud during 1933-34. The streets of Vienna were littered with tokens dropped like confetti on the city, stating "Hitler gives work." "Hitler gives bread." Having endured World War I, she was now gathering her resources to face the second cataclysm she knew was approaching. In analysis, Hilda Doolittle explored her Pennsylvania childhood, her relationship with Ezra Pound (inventory of her nom de plume H.D.), Havelock Ellis, D.H. Lawrence, her ex-husband Richard Aldington, and subsequent companion Winifred Ellerman ("Bryher"), as well as her own creative processes.


Freud, regarding H.D. as a student as well as a patient, wads hardly the detached presence one might imagine. Revealed here in the poet's words and in his own letters, which comprise an appendix, is the considerate friend, the charming Viennese gentleman—art collector, dog lover, wit—and the pioneer, always revising his ideas and possessed of an insight that could be terrifying in its force.
09

The Gift: Novel
The connections and interconnections of past and present––the realization that life is a whole continuously echoing back to the past and unfolding toward the future––were sources of the strength, renewal, and joy celebrated in H.D.'s Trilogy; and, in a differing, but no less real way, in The Gift––her novelistic memoir of childhood.

In recapturing her memories of being a very little girl in Bethlehem, Pennsylvania, and later on a country place outside Philadelphia, H.D. "let the story tell itself or the child tell it." It is this voice or child's-eye view that lends The Gift its special charm as H.D. recreates the ordinary and extraordinary occasions of her early youth, the nightmares and delights. A road-company presentation of Uncle Tom's Cabin, Christmas Eve with its particular family ritual, a family outing, a disturbing accident––the happenings and incidents, perceptions and misconceptions with which a child's life is crowded are the substance of this most winning book. As she did for the H.D. novel HERmione, H.D.'s daughter, Perdita Schaffner, provides a fine introduction.