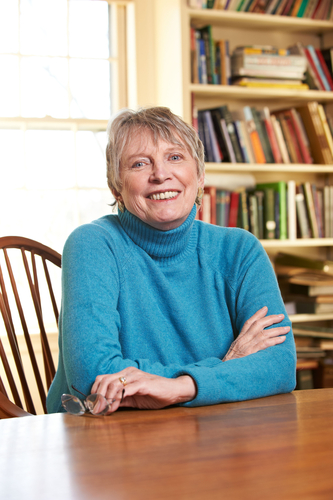 Taken from Lowry's website:
"I’ve always felt that I was fortunate to have been born the middle child of three. My older sister, Helen, was very much like our mother: gentle, family-oriented, eager to please. Little brother Jon was the only boy and had interests that he shared with Dad; together they were always working on electric trains and erector sets; and later, when Jon was older, they always seemed to have their heads under the raised hood of a car. That left me in-between, and exactly where I wanted most to be: on my own. I was a solitary child who lived in the world of books and my own vivid imagination.

Because my father was a career military officer - an Army dentist - I lived all over the world. I was born in Hawaii, moved from there to New York, spent the years of World War II in my mother’s hometown: Carlisle, Pennsylvania, and from there went to Tokyo when I was eleven. High school was back in New York City, but by the time I went to college (Brown University in Rhode Island), my family was living in Washington, D.C.

I married young. I had just turned nineteen - just finished my sophomore year in college - when I married a Naval officer and continued the odyssey that military life requires. California. Connecticut (a daughter born there). Florida (a son). South Carolina. Finally Cambridge, Massachusetts, when my husband left the service and entered Harvard Law School (another daughter; another son) and then to Maine - by now with four children under the age of five in tow. My children grew up in Maine. So did I. I returned to college at the University of Southern Maine, got my degree, went to graduate school, and finally began to write professionally, the thing I had dreamed of doing since those childhood years when I had endlessly scribbled stories and poems in notebooks.

After my marriage ended in 1977, when I was forty, I settled into the life I have lived ever since. Today I am back in Cambridge, Massachusetts, living and writing in a house dominated by a very shaggy Tibetan Terrier named Bandit. For a change of scenery Martin and I spend time in Maine, where we have an old (it was built in 1768!) farmhouse on top of a hill. In Maine I garden, feed birds, entertain friends, and read...

My books have varied in content and style. Yet it seems that all of them deal, essentially, with the same general theme: the importance of human connections. A Summer to Die, my first book, was a highly fictionalized retelling of the early death of my sister, and of the effect of such a loss on a family. Number the Stars, set in a different culture and era, tells the same story: that of the role that we humans play in the lives of our fellow beings.

The Giver - and Gathering Blue, and the newest in the trilogy: Messenger - take place against the background of very different cultures and times. Though all three are broader in scope than my earlier books, they nonetheless speak to the same concern: the vital need of people to be aware of their interdependence, not only with each other, but with the world and its environment.

My older son was a fighter pilot in the United States Air Force. His death in the cockpit of a warplane tore away a piece of my world. But it left me, too, with a wish to honor him by joining the many others trying to find a way to end conflict on this very fragile earth.
I am a grandmother now. For my own grandchildren - and for all those of their generation - I try, through writing, to convey my passionate awareness that we live intertwined on this planet and that our future depends upon our caring more, and doing more, for one another."

The Giver (The Giver, #1)
The Giver, the 1994 Newbery Medal winner, has become one of the most influential novels of our time. The haunting story centers on twelve-year-old Jonas, who lives in a seemingly ideal, if colorless, world of conformity and contentment. Not until he is given his life assignment as the Receiver of Memory does he begin to understand the dark, complex secrets behind his fragile community. This movie tie-in edition features cover art from the movie and exclusive Q&A with members of the cast, including Taylor Swift, Brenton Thwaites and Cameron Monaghan.
02

Number the Stars
Ten-year-old Annemarie Johansen and her best friend Ellen Rosen often think of life before the war. It's now 1943 and their life in Copenhagen is filled with school, food shortages, and the Nazi soldiers marching through town. When the Jews of Denmark are "relocated," Ellen moves in with the Johansens and pretends to be one of the family. Soon Annemarie is asked to go on a dangerous mission to save Ellen's life.
03

Gathering Blue (The Giver, #2)
In her strongest work to date, Lois Lowry once again creates a mysterious but plausible future world. It is a society ruled by savagery and deceit that shuns and discards the weak. Left orphaned and physically flawed, young Kira faces a frightening, uncertain future. Blessed with an almost magical talent that keeps her alive, she struggles with ever broadening responsibilities in her quest for truth, discovering things that will change her life forever.

As she did in The Giver, Lowry challenges readers to imagine what our world could become, and what will be considered valuable. Every reader will be taken by Kira's plight and will long ponder her haunting world and the hope for the future.

Messenger (The Giver, #3)
Messenger is the masterful third novel in the Giver Quartet, which began with the dystopian bestseller The Giver, now a major motion picture.

Matty has lived in Village and flourished under the guidance of Seer, a blind man known for his special sight. Village once welcomed newcomers, but something sinister has seeped into Village and the people have voted to close it to outsiders. Matty has been invaluable as a messenger. Now he must risk everything to make one last journey through the treacherous forest with his only weapon, a power he unexpectedly discovers within himself.
05

Son (The Giver Quartet, #4)
They called her Water Claire. When she washed up on their shore, no one knew that she came from a society where emotions and colors didn’t exist. That she had become a Vessel at age thirteen. That she had carried a Product at age fourteen. That it had been stolen from her body. Claire had a son. But what became of him she never knew. What was his name? Was he even alive? She was supposed to forget him, but that was impossible. Now Claire will stop at nothing to find her child, even if it means making an unimaginable sacrifice.

Son thrusts readers once again into the chilling world of the Newbery Medal winning book, The Giver, as well as Gathering Blue and Messenger where a new hero emerges. In this thrilling series finale, the startling and long-awaited conclusion to Lois Lowry’s epic tale culminates in a final clash between good and evil.
06

Gossamer
Where do dreams come from? What stealthy nighttime messengers are the guardians of our most deeply hidden hopes and our half-forgotten fears? Drawing on her rich imagination, two-time Newbery winner Lois Lowry confronts these questions and explores the conflicts between the gentle bits and pieces of the past that come to life in dream, and the darker horrors that find their form in nightmare. In a haunting story that tiptoes between reality and imagination, two people—a lonely, sensitive woman and a damaged, angry boy—face their own histories and discover what they can be to one another, renewed by the strength that comes from a tiny, caring creature they will never see.

Gossamer is perfect for readers not quite ready for Lois Lowry's Newbery-Award winner The Giver and also for readers interested in dreams, nightmares, spirits and the dream world.
07

From the New York Times Bestselling and two-time Newbery Medal-winning author of The Giver and Number the Stars, comes a delightfully tongue-in-cheek story about parents trying to get rid of their four children and the children who are all too happy to lose their beastly parents and be on their own.

The Willoughby children—Timothy, twins Barnaby A and Barnaby B, and their sister Jane—are fond all old-fashioned things, but especially old-fashioned adventures. What they aren't fond of, however, are their parents. Truth be told, their parents aren't the fondest of them, either, and they're concocting an evil plan to get rid of their children once and for all!

Both parents and children have plenty of dastardly ideas and tricks up their sleeves. The only thing they don't have is any idea of what lies between them and a happily-ever-after.

Complete with a cheeky glossary and bibliography, this hilarious and wonderfully old-fashioned parody pays playful homage to classic works of children’s literature like Mary Poppins and A Christmas Carol.
09

A Summer to Die
Thirteen-year-old Meg envies her sister's beauty and popularity. Her feelings don't make it any easier for her to cope with Molly's strange illness and eventual death.
10

Gooney Bird Greene
Two-time Newbery Medalist Lois Lowry introduces a new girl in class who loves being the center of attention and tells the most entertaining “absolutely true” stories.

There’s never been anyone like Gooney Bird Greene at Watertower Elementary School. What other new kid comes to school wearing pajamas and cowboy boots one day and a polka-dot t-shirt and tutu on another? Gooney Bird has to sit right smack in the middle of the class because she likes to be in the middle of everything. She is the star of story time and keeps her teacher and classmates on the edge of their seats with her “absolutely true” stories. But what about her classmates? Do they have stories good enough to share?