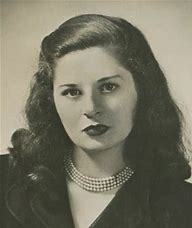 Maureen Daly, a writer whose first novel, “Seventeenth Summer,” anticipated the young-adult genre by decades when it appeared in 1942 and has endured as a classic coming-of-age story, died on Monday, Sep 25, 2006 in Palm Desert, Calif. She was 85.
The cause was non-Hodgkins lymphoma, her sister, Sheila Daly White, said.

Written when Ms. Daly was a teenager and published while she was still in college, “Seventeenth Summer” told the story of Angie and Jack, two teenagers who fall in love during one enchanted summer in a Wisconsin lakeside town. Written in a straightforward, unpretentious style, the book is full of innocent pastimes — boating on the lake, Cokes at the corner drugstore — mingled with more grown-up pleasures like beer and cigarettes.

Reviewing the novel in The New York Times Book Review, Edith H. Walton wrote:
“By a kind of miracle, and perhaps because she is so close to an experience not easy to recapture, Miss Daly has made an utterly enchanting book out of this very fragile little story — one which rings true and sweet and fresh and sound.”

Published originally by Dodd, Mead & Company and most recently in 2002 by Simon & Schuster, “Seventeenth Summer” has sold more than a million copies worldwide, according to the reference book Authors and Artists for Young Adults.

Though fiction about adolescents was nothing new in the 1940’s — among its eminent practitioners had been Mark Twain, Booth Tarkington and Louisa May Alcott — the concept of novels specifically earmarked for adolescents would not exist until the late 1960’s, ushered in by writers like Paul Zindel and S. E. Hinton.

Yet a quarter-century earlier, “Seventeenth Summer” anticipated many of these authors’ concerns, as Teri Lesesne, a professor of library science at Sam Houston State University and a specialist in young-adult literature, explained in a telephone interview yesterday.

“For ’42, this is a pretty avant-garde young woman: she smokes, she drinks, she dates,” Ms. Lesesne said. “She thinks about more than a chaste kiss at the end of a date.”

Maureen Patricia Daly was born on March 15, 1921, in Castlecaulfield, County Tyrone, Northern Ireland. She came to the United States with her family as a young child.

When Ms. Daly was 15, her short story “Fifteen” was published in Scholastic magazine. The next year she wrote another story, fittingly titled “Sixteen,” that was included in the O. Henry collection of 1938, which gathered together the best short stories of the previous year. Then, working in the basement of her parents’ home in Fond du Lac, Wis., she began “Seventeenth Summer.”

After earning undergraduate degrees in English and Latin from Rosary College in River Forest., Ill., Ms. Daly worked as a reporter and book critic for The Chicago Tribune. She was later on the staff of Ladies’ Home Journal and The Saturday Evening Post.

Among her many other books are the young-adult novels “Acts of Love” (1986) and “First a Dream” (1990), both published by Scholastic, and “Mention My Name in Mombasa: The Unscheduled Adventures of an American Family Abroad” (Dodd, Mead, 1958), a travel memoir written with her husband, William P. McGivern, a well-known crime novelist.

Ms. Daly’s husband died in 1982; her daughter, Megan McGivern Shaw, died in 1983 at the age of 35. Besides her sister, Ms. White, of Manhattan, she is survived by a son, Patrick McGivern, of Palm Desert, and two grandchildren.

In an interview quoted in the reference book Major Authors and Illustrators for Children and Young Adults, Ms. Daly recalled the special urgency — akin to grasping quicksilver — that gave rise to “Seventeenth Summer.”

“I was so wildly and vividly happy about love and life at a particular time in my existence,” she said. “I wanted to get all that fleeting excitement down on paper before it passed, or I forg

Seventeenth Summer
Until the summer before college, Angie Morrow didn't really date. Her mother didn't like her to go out much. But no one -- not even Angie's mother -- can resist the charm of strikingly handsome Jack Duluth. His good looks grab Angies's attention from the moment in June when Jack throws Angie a smile at McKight's drugstore. And on their first date sailing under the stars -- when Jack leans in and whispers to Angie, You look nice with the wind in your hair, the strange new feeling s begin. Tingles, prickles, warmth: the tell-tale signs of romance. It's the beginning of an unforgettable summer for Angie, full of wonder, warmth, tears, challenge, and love.Maureen Daly had created a love story so honest that it has withstood the test of time, winning new fans for more than six decades. Today, this classic is enjoyed by many who think of it as the quintessential love story, and as a glimpse of love in the 1940's; a refreshing alternative to modern love stories, reflecting the beauty and innocence of new love.
02

The Small War of Sergeant Donkey
Donkeys by the hundreds! Twelve-year-old Chico Filippo, whose own donkeys were confiscated years before by the German army, can t stay away from the newly set up American Remount Depot. Here, in the last months of World War II in Italy, thousands of supply mules and donkeys are processed and sent onto the fierce mountain fighting in the Apennines. One of the handlers introduces Chico to a small courageous animal the boy names Sergeant Donkey. Drawn into friendship and then into unexpected danger, Chico must demonstrate his own simple courage. More than an animal or war story, this short book has a depth of truth about people of different ages and nationalities who still share a common love of the land and of human dignity. Age 8-up"
03

Acts of Love
When tall, elusive Dallas meets Retta, they are drawn together, but Retta can only catch glimpses of the real Dallas for he has lived a hard, nomadic life with secrets to hide. Then a new highway is cut through her home, and she makes a startling discovery about Dallas. Maureen Daly is the author of the teen classic Seventeenth Summer. This is her first novel for young adults in 44 years. A Point edition.
04

Sixteen and Other Stories
05

The Ginger Horse
The story revolves around 13 year old Rob, his older brother, his father, and school friend Katie, set in an early 20th century Scottish mining town. Rob faces the choice to accept what's available in his village - most men work in the coal mine starting about age 12 - or study and strive for something else that will eventually take him away from his town, friends, and family. Other people in Rob's life - his father's loss of wife and oldest son, his brother who studies at night after working all day in the mines, and one pit pony's unwillingness to return to work in the mines reflect the boy's internal struggle. Rob's strong compassion for animals leads him to befriend the ginger-colored pony and, with Katie's help, find a safe place to set the pony free.

The Ginger Horse is mainly a horse story. But it also blends a bit of cultural history, the responsibilities of family, the maturing choices of children, and lightly touches on how people deal with death. (from Bozhoo on Amazon)
06

Early Years Management In Practice
Fully up to date with the latest information and theories, this text supports students and practitioners working in early years management.
07

First a Dream
When Retta Caldwell has a chance to return to her hometown in Pennsylvania, she must decide whether to return to her family in California or stay with her true love, Dallas Dobson. The beautiful sequel to Acts of Love.
08

Understanding Early Years Theory in Practice
Provides childcare students and practitioners with an overview of the major theories of children's development and learning (from birth to eight years).
09