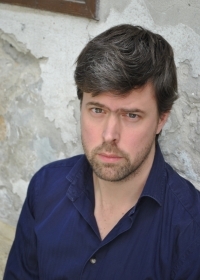 David Szalay (born 1974 in Montreal, Quebec) is an English writer.

He was born in Canada, moved to the UK the following year and has lived there ever since. He studied at Oxford University and has written a number of radio dramas for the BBC.

He won the Betty Trask Award for his first novel, London and the South-East, along with the Geoffrey Faber Memorial Prize. Since then he has written two other novels: Innocent (2009) and Spring (2011).

He has also recently been named one of The Telegraph's Top 20 British Writers Under 40 and has also made it onto Granta magazine's 2013 list of the Best of Young British Novelists.

A fourth novel All That Man Is was longlisted for The Man Booker Prize 2016.

David Szalay is the author of books: All That Man Is, Turbulence, Spring, London and the South-East, The Innocent, Turbulenzen: Roman, Turbulences, Was ein Mann ist, Granta 123: The Best of Young British Novelists 4, Pursuit: The Balvenie Stories Collection

All That Man Is
Nine men. Each of them at a different stage in life, each of them away from home, and each of them striving -- in the suburbs of Prague, in an overdeveloped Alpine village, beside a Belgian motorway, in a dingy Cyprus hotel -- to understand what it means to be alive, here and now. Tracing a dramatic arc from the spring of youth to the winter of old age, the ostensibly separate narratives of All That Man Is aggregate into a picture of a single shared existence, a picture that interrogates the state of modern manhood while bringing to life, unforgettably, the physical and emotional terrain of an increasingly globalized Europe. And so these nine lives form an ingenious and new kind of novel, in which David Szalay expertly plots a dark predicament for the twenty-first-century man.

Dark and disturbing, but also often wickedly and uproariously comic, All That Man Is is notable for the acute psychological penetration Szalay brings to bear on his characters, from the working-class ex-grunt to the pompous college student, the middle-aged loser to the Russian oligarch. Steadily and mercilessly, as this brilliantly conceived book progresses, the protagonist at the center of each chapter is older than the last one, it gets colder out, and All That Man Is gathers exquisite power. Szalay is a writer of supreme gifts -- a master of a new kind of realism that vibrates with detail, intelligence, relevance, and devastating pathos.
02

Turbulence
From the acclaimed, Man Booker Prize-shortlisted author of All That Man Is, a stunning, virtuosic novel about twelve people, mostly strangers, and the surprising ripple effect each one has on the life of the next as they cross paths while in transit around the world.

A woman strikes up a conversation with the man sitting next to her on a plane after some turbulence. He returns home to tragic news that has also impacted another stranger, a shaken pilot on his way to another continent who seeks comfort from a journalist he meets that night. Her life shifts subtly as well, before she heads to the airport on an assignment that will shift more lives in turn.

In this wondrous, profoundly moving novel, Szalay's diverse protagonists circumnavigate the planet in twelve flights, from London to Madrid, from Dakar to Sao Paulo, to Toronto, to Delhi, to Doha, en route to see lovers or estranged siblings, aging parents, baby grandchildren, or nobody at all. Along the way, they experience the full range of human emotions from loneliness to love and, knowingly or otherwise, change each other in one brief, electrifying interaction after the next.

Written with magic and economy and beautifully exploring the delicate, crisscrossed nature of relationships today, Turbulence is a dazzling portrait of the interconnectedness of the modern world.
03

James is a man with a checkered past—sporadic entrepreneur, one-time film producer, almost a dot-com millionaire—now alone in a flat in Bloomsbury, running a shady horse-racing-tips operation. Katherine is a manager at a luxury hotel, a job she'd intended to leave years ago, and is separated from her husband. The novel unfolds in 2006, at the end of the money-for-nothing years, as a chance meeting leads to an awkward tryst and James tries to make sense of a relationship where "no" means "maybe" and a "yes" can never be taken for granted.

David Szalay builds a novel of immense resonance as he cycles though perspectives that add layers of depth to the hesitations, missteps, and tensions as James tries to win Katherine. James's other pursuit is money, and Spring follows his investments and schemes, from a half share in a thoroughbred to a suit-and-tie day job he's taken to pay the bills. Spring is a sharply tuned novel so nuanced and precise in its psychology that it establishes Szalay as a major talent.
04

London and the South-East
David Szalay's debut novel is set in the alcohol-sodden, materialistic, insecure and increasingly sham world of a telephone salesman. The salesman in question is Paul Rainey, a 40-year-old functioning alcoholic on anti-anxiety medication who commutes into London every day from Hove.
05

The Innocent
It is spring 1948 and Aleksandr, a major in the MGB - forerunner of the KGB - is sent to an isolated psychiatric clinic in the Ural mountains to investigate one of the patients there, Anatoly Yudin, a man long presumed dead, once a famous pianist, now a severely incapacitated veteran of the Second World War ...

Twenty-four years later, in the summer of 1972 - the summer of Nixon's visit to Moscow, of the Fischer-Spassky chess match, of the Munich Olympics and their hostage crisis - the Cold War is entering détente, and the values that shaped Aleksandr's life are starting to dissolve into uncertainty. Haunted by the events of the past, and with his Stalinist faith once more under threat, he interrogates his memories of the Yudin case, and tries to trace its effects on himself, and on those he loved most.

We know the horrors of the police state and the purges, but The Innocent takes us on a journey into the everyday of Communist Russia, bringing alive the intensely personal consequences of a regime, the power of institutions and ideologies to define a life - to crush it or invest it with meaning. Following on from the success of his prize-winning debut, David Szalay returns with a searing work of acute realism and bleak beauty, the breathtaking next stage of a major literary career.
06

Granta 123: The Best of Young British Novelists 4
Barker, Barnes, Hollinghurst, Ishiguro, Mitchell, Rushdie, Smith, Tremain, Winterson . . . Long before they were household names, they were Granta Best of Young British Novelists. With each Young Novelist list — in 1983, 1993, and 2003 — came new ways of witnessing the world, introductions to unforgettable characters and mysterious and addictive voices. In 2013, thirty years after the first collection, the magazine asked once again: which writers are setting the bar for a new decade in British literature?
10