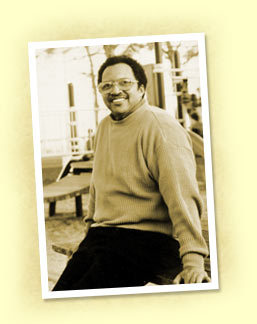 Walter Dean Myers was born on August 12, 1937 in Martinsburg, West Virginia but moved to Harlem with his foster parents at age three. He was brought up and went to public school there. He attended Stuyvesant High School until the age of seventeen when he joined the army.

After serving four years in the army, he worked at various jobs and earned a BA from Empire State College. He wrote full time after 1977.

Walter wrote from childhood, first finding success in 1969 when he won the Council on Interracial Books for Children contest, which resulted in the publication of his first book for children, Where Does the Day Go?, by Parent's Magazine Press. He published over seventy books for children and young adults. He received many awards for his work in this field including the Coretta Scott King Award, five times. Two of his books were awarded Newbery Honors. He was awarded the Margaret A. Edwards Award and the Virginia Hamilton Award. For one of his books, Monster, he received the first Michael Printz Award for Young Adult literature awarded by the American Library Association. Monster and Autobiography of My Dead Brother were selected as National Book Award Finalists.

In addition to the publication of his books, Walter contributed to educational and literary publications. He visited schools to speak to children, teachers, librarians, and parents. For three years he led a writing workshop for children in a school in Jersey City, New Jersey.

Walter Dean Myers was married, had three grown children and lived in Jersey City, New Jersey. He died on July 1, 2014, following a brief illness. He was 76 years old.

Monster
Sometimes I feel like I have walked into the middle of a movie. Maybe I can make my own movie. The film will be the story of my life. No, not my life, but of this experience. I'll call it what the lady who is the prosecutor called me. Monster.

Fade In: Interior Court. A guard sits at a desk behind Steve. Kathy O'Brien, Steve's lawyer, is all business as she talks to Steve.

O'Brien
Let me make sure you understand what's going on. Both you and this king character are on trial for felony murder. Felony Murder is as serious as it gets. . . . When you're in court, you sit there and pay attetion. You let the jury know that you think the case is a serious as they do. . . .

O'Brien (seriously)
It probably depends on what you mean by "win."

Sixteen-year-old Steve Harmon is on trial for murder. A Harlem drugstore owner was shot and killed in his store, and the word is that Steve served as the lookout.

Guilty or innocent, Steve becomes a pawn in the hands of "the system," cluttered with cynical authority figures and unscrupulous inmates, who will turn in anyone to shorten their own sentences. For the first time, Steve is forced to think about who he is as he faces prison, where he may spend all the tomorrows of his life.

As a way of coping with the horrific events that entangle him, Steve, an amateur filmmaker, decides to transcribe his trial into a script, just like in the movies. He writes it all down, scene by scene, the story of how his whole life was turned around in an instant. But despite his efforts, reality is blurred and his vision obscured until he can no longer tell who he is or what is the truth. This compelling novel is Walter Dean Myers's writing at its best.
02

Fallen Angels
An exciting, eye-catching repackage of acclaimed author Walter Dean Myers' bestselling paperbacks, to coincide with the publication of SUNRISE OVER FALLUJA in hardcover.

A coming-of-age tale for young adults set in the trenches of the Vietnam War in the late 1960s, this is the story of Perry, a Harlem teenager who volunteers for the service when his dream of attending college falls through. Sent to the front lines, Perry and his platoon come face-to-face with the Vietcong and the real horror of warfare. But violence and death aren't the only hardships. As Perry struggles to find virtue in himself and his comrades, he questions why black troops are given the most dangerous assignments, and why the U.S. is there at all.
03

Slam!
An exciting, eye-catching repackage of acclaimed author Walter Dean Myers' bestselling paperbacks, to coincide with the publication of SUNRISE OVER FALLUJA in hardcover.

Seventeen-year-old Greg "Slam" Harris can do it all on the basketball court. He's seen ballplayers come and go, and he knows he could be one of the lucky ones. Maybe he'll make it to the top. Or maybe he'll stumble along the way. Slam's grades aren't that hot. And when his teachers jam his troubles in his face, he blows up.
Slam never doubted himself on the court until he found himself going one-on-one with his own future, and he didn't have the ball.

Sunrise Over Fallujah
A powerful new novel about the heroics and horror of war from Walter Dean Myers, whose bestselling book FALLEN ANGELS celebrates its 20th anniversary.

Operation Iraqi Freedom, that's the code name. But the young men and women in the military's Civil Affairs Battalion have a simpler name for it: WAR.

In this new novel, Walter Dean Myers looks at a contemporary war with the same power and searing insight he brought to the Vietnam war of his classic, FALLEN ANGELS. He creates memorable characters like the book's narrator, Birdy, a young recruit from Harlem who's questioning why he even enlisted; Marla, a blond, tough-talking, wisecracking gunner; Jonesy, a guitar-playing bluesman who just wants to make it back to Georgia and open a club;

Shooter
The groundbreaking and widely praised novel about a school shooting, from the acclaimed author of Monster. Multiple narratives, a personal journal, and newspaper and police reports add perspective and pull readers into the story.

"Questions of guilt and innocence drive the plot and stay with the reader," said Hazel Rochman in a starred Booklist review. "Highly readable."

"A haunting story that uncovers the pain of several high school students," according to Teenreads.com. "It explores the tragedies of school violence and how the result of bullying can go to the most dramatic extreme. Myers has a gift for expressing the voices of his characters. Shooter is not a light read, but it will leave you reeling."
06

Hoops
All eyes are on seventeen-year-old Lonnie Jackson while he practices with his team for a city-wide basketball Tournament of Champions. His coach, Cal, knows Lonnie has what it takes to be a pro-basketball player, but warns him about giving in to the pressure. Cal knows because he, too, once had the chance--but sold out.

As the Tournament nears, Lonnie learns that some heavy bettors want Cal to keep him on the bench so that the team will lose the championship. As the last seconds of the game tick away Lonnie and Cal must make a decision. Are they willing to blow the chance of a lifetime?
07

Bad Boy: A Memoir
In a memoir that is gripping, funny, and ultimately unforgettable, New York Times bestselling author Walter Dean Myers travels back to his roots in the magical world of Harlem during the 1940s and 1950s. Here is the story of one of the most distinguished writers of young people's literature today.

As a boy, Myers was quick-tempered and physically strong, always ready for a fight. He also read voraciously—he would check out books from the library and carry them home, hidden in brown paper bags in order to avoid other boys' teasing. He aspired to be a writer.

But while growing up in a poor family in Harlem, his hope for a successful future diminished as he came to realize fully the class and racial struggles that surrounded him. He began to doubt himself and the values that he had always relied on, attending high school less and less, turning to the streets and to his books for comfort.

When it was first published in 1988, Scorpions amazed readers. It continues to do so today. This special twenty-fifth anniversary edition contains the original Scorpions novel, plus an extra Q&A with New York Times bestselling author Walter Dean Myers—including questions about juvenile detention facilities, gang life today, and friendship.

Also included are a sneak peek at Kick, by Walter Dean Myers and Ross Workman, and an excerpt from Myers's New York Times bestselling novel Monster!
09

Lockdown
When I first got to Progress, it freaked me out to be locked in a room and unable to get out. But after a while, when you got to thinking about it, you knew nobody could get in, either.

It seems as if the only progress that's going on at Progress juvenile facility is moving from juvy jail to real jail. Reese wants out early, but is he supposed to just sit back and let his friend Toon get jumped? Then Reese gets a second chance when he's picked for the work program at a senior citizens' home. He doesn't mean to keep messing up, but it's not so easy, at Progress or in life. One of the residents, Mr. Hooft, gives him a particularly hard time. If he can convince Mr. Hooft that he's a decent person, not a criminal, maybe he'll be able to convince himself.

Acclaimed author Walter Dean Myers offers an honest story about finding a way to make it without getting lost in the shuffle.
10

"You can create something new and change the direction of your life." Walter Dean Myers on DOPE SICK

A drug deal goes south and a cop has been shot. Lil J's on the run. And he's starting to get dope sick. He'd do anything to change the last twenty-four hours, and when he stumbles into an abandoned building, it actually might be possible...

Elements of magical realism intensify this harrowing story about drug use, violence, perceptions of reality, and second chances.

"Drugs, drive-by shootings, gang warfare, wasted lives Myers has written about all these subjects with nuanced understanding and a hard-won, qualified sense of hope." The New York Times