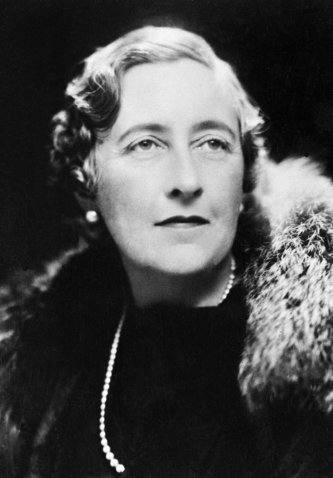 Agatha Christie is the best-selling author of all time. She wrote 66 crime novels and story collections, fourteen plays, and six novels under a pseudonym in Romance. Her books have sold over a billion copies in the English language and a billion in translation. According to Index Translationum, she remains the most-translated individual author, having been translated into at least 103 languages. She is the creator of two of the most enduring figures in crime literature-Hercule Poirot and Miss Jane Marple-and author of The Mousetrap, the longest-running play in the history of modern theatre.

Before marrying and starting a family in London, she had served in a Devon hospital during the First World War, tending to troops coming back from the trenches. During the First World War, she worked at a hospital as a nurse; later working at a hospital pharmacy, a job that influenced her work, as many of the murders in her books are carried out with poison. During the Second World War, she worked as a pharmacy assistant at University College Hospital, London, acquiring a good knowledge of poisons which feature in many of her novels.

Her first novel, The Mysterious Affair at Styles, came out in 1920. During her first marriage, Agatha published six novels, a collection of short stories, and a number of short stories in magazines.

In late 1926, Agatha's husband, Archie, revealed that he was in love with another woman, Nancy Neele, and wanted a divorce. On 8 December 1926 the couple quarreled, and Archie Christie left their house, Styles, in Sunningdale, Berkshire, to spend the weekend with his mistress at Godalming, Surrey. That same evening Agatha disappeared from her home, leaving behind a letter for her secretary saying that she was going to Yorkshire. Her disappearance caused an outcry from the public, many of whom were admirers of her novels. Despite a massive manhunt, she was not found for eleven days.

In 1930, Christie married archaeologist Max Mallowan (Sir Max from 1968) after joining him in an archaeological dig. Their marriage was especially happy in the early years and remained so until Christie's death in 1976.

Christie frequently used familiar settings for her stories. Christie's travels with Mallowan contributed background to several of her novels set in the Middle East. Other novels (such as And Then There Were None) were set in and around Torquay, where she was born. Christie's 1934 novel Murder on the Orient Express was written in the Hotel Pera Palace in Istanbul, Turkey, the southern terminus of the railway. The hotel maintains Christie's room as a memorial to the author. The Greenway Estate in Devon, acquired by the couple as a summer residence in 1938, is now in the care of the National Trust.

Christie often stayed at Abney Hall in Cheshire, which was owned by her brother-in-law, James Watts. She based at least two of her stories on the hall: the short story The Adventure of the Christmas Pudding, and the novel After the Funeral. Abney Hall became Agatha's greatest inspiration for country-house life, with all the servants and grandeur which have been woven into her plots.


To honour her many literary works, she was appointed Commander of the Order of the British Empire in the 1956 New Year Honours. The next year, she became the President of the Detection Club.

And Then There Were None
First, there were ten—a curious assortment of strangers summoned as weekend guests to a little private island off the coast of Devon. Their host, an eccentric millionaire unknown to all of them, is nowhere to be found. All that the guests have in common is a wicked past they're unwilling to reveal—and a secret that will seal their fate. For each has been marked for murder. A famous nursery rhyme is framed and hung in every room of the mansion:

When they realize that murders are occurring as described in the rhyme, terror mounts. One by one they fall prey. Before the weekend is out, there will be none. Who has choreographed this dastardly scheme? And who will be left to tell the tale? Only the dead are above suspicion.
02

A refugee of the Great War, Poirot is settling in England near Styles Court, the country estate of his wealthy benefactor, the elderly Emily Inglethorp. When Emily is poisoned and the authorities are baffled, Poirot puts his prodigious sleuthing skills to work. Suspects are plentiful, including the victim’s much younger husband, her resentful stepsons, her longtime hired companion, a young family friend working as a nurse, and a London specialist on poisons who just happens to be visiting the nearby village.

All of them have secrets they are desperate to keep, but none can outwit Poirot as he navigates the ingenious red herrings and plot twists that earned Agatha Christie her well-deserved reputation as the queen of mystery.
03

Murder on the Orient Express (Hercule Poirot, #10)
Just after midnight, a snowdrift stops the Orient Express in its tracks. The luxurious train is surprisingly full for the time of the year, but by the morning it is one passenger fewer. An American tycoon lies dead in his compartment, stabbed a dozen times, his door locked from the inside.

Isolated and with a killer in their midst, detective Hercule Poirot must identify the murderer—in case he or she decides to strike again.
04

Murder at the Vicarage (Miss Marple, #1)
‘Anyone who murdered Colonel Protheroe,’ declared the parson, brandishing a carving knife above a joint of roast beef, ‘would be doing the world at large a favour!’ It was a careless remark for a man of the cloth. And one which was to come back and haunt the clergyman just a few hours later – when the colonel was found shot dead in the clergyman’s study. But as Miss Marple soon discovers, the whole village seems to have had a motive to kill Colonel Protheroe.
05

The peaceful English village of King’s Abbot is stunned. First, the attractive widow Ferrars dies from an overdose of veronal. Not twenty-four hours later, Roger Ackroyd—the man she had planned to marry—is murdered. It is a baffling, complex case involving blackmail, suicide, and violent death, a cast that taxes Hercule Poirot’s “little grey cells” before he reaches one of the most startling conclusions of his fabled career.
06

Death on the Nile (Hercule Poirot, #17)
The tranquillity of a cruise along the Nile is shattered by the discovery that Linnet Ridgeway has been shot through the head. She was young, stylish and beautiful, a girl who had everything - until she lost her life. Hercule Poirot recalls an earlier outburst by a fellow passenger: 'I'd like to put my dear little pistol against her head and just press the trigger.' Yet in this exotic setting, nothing is ever quite what it seems...
07

The A.B.C. Murders (Hercule Poirot, #13)
When Alice Asher is murdered in Andover, Hercule Poirot is already looking into the clues. Alphabetically speaking, it's one letter down, twenty-five to go.

There's a serial killer on the loose. His macabre calling card is to leave the ABC Railway Guide beside each victim's body. But if A is for Alice Asher, bludgeoned to death in Andover, and B is for Betty Bernard, strangled with her belt on the beach at Bexhill, who will then be Victim C? Considered to be one of Agatha Christie's best.
08

The Man in the Brown Suit (Colonel Race, #1)
Newly-orphaned Anne Beddingfeld is a nice English girl looking for a bit of adventure in London. But she stumbles upon more than she bargained for! Anne is on the platform at Hyde Park Corner tube station when a man falls onto the live track, dying instantly. A doctor examines the man, pronounces him dead, and leaves, dropping a note on his way. Anne picks up the note, which reads "17.1 22 Kilmorden Castle". The next day the newspapers report that a beautiful ballet dancer has been found dead there-- brutally strangled. A fabulous fortune in diamonds has vanished. And now, aboard the luxury liner Kilmorden Castle, mysterious strangers pillage her cabin and try to strangle her. What are they looking for? Why should they want her dead? Lovely Anne is the last person on earth suited to solve this mystery... and the only one who can! Anne's journey to unravel the mystery takes her as far afield as Africa and the tension mounts with every step... and Anne finds herself struggling to unmask a faceless killer known only as 'The Colonel'....
09

The Body in the Library (Miss Marple, #3)
It’s seven in the morning. The Bantrys wake to find the body of a young woman in their library. She is wearing evening dress and heavy make-up, which is now smeared across her cheeks.

But who is she? How did she get there? And what is the connection with another dead girl, whose charred remains are later discovered in an abandoned quarry?

The respectable Bantrys invite Miss Marple to solve the mystery… before tongues start to wag.
10

Evil Under the Sun (Hercule Poirot, #24)
It seems that no matter how hard he tries, Poirot never quite gets a holiday. This story sees him in Devon, Agatha Christie’s home county, and, of course, among the scantily clad sunbathers, a murdered woman is found.

It was not unusual to find the beautiful bronzed body of the sun-loving Arlena Stuart stretched out on a beach, face down. Only, on this occasion, there was no sun… she had been strangled. Ever since Arlena’s arrival at the resort, Hercule Poirot had detected sexual tension in the seaside air. But could this apparent ‘crime of passion’ have been something more evil and premeditated altogether?