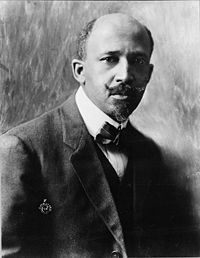 In 1868, W.E.B. Du Bois (William Edward Burghardt Du Bois, pronounced 'doo-boyz') was born in Massachusetts. He attended Fisk College in Nashville, then earned his BA in 1890 and his MS in 1891 from Harvard. Du Bois studied at the University of Berlin, then earned his doctorate in history from Harvard in 1894. He taught economics and history at Atlanta University from 1897-1910. The Souls of Black Folk (1903) made his name, in which he urged black Americans to stand up for their educational and economic rights. Du Bois was a founder of the National Association for the Advancement of Colored People, and edited the NAACP's official journal, "Crisis," from 1910 to 1934. Du Bois turned "Crisis" into the foremost black literary journal. The black nationalist expanded his interests to global concerns, and is called the "father of Pan-Africanism" for organizing international black congresses.

Although he used some religious metaphor and expressions in some of his books and writings, Du Bois called himself a freethinker. In "On Christianity," a posthumously published essay, Du Bois critiqued the black church: "The theology of the average colored church is basing itself far too much upon 'Hell and Damnation'—upon an attempt to scare people into being decent and threatening them with the terrors of death and punishment. We are still trained to believe a good deal that is simply childish in theology. The outward and visible punishment of every wrong deed that men do, the repeated declaration that anything can be gotten by anyone at any time by prayer." Du Bois became a member of the Communist Party and officially repudiated his U.S. citizenship at the end of his life, dying in his adopted country of Ghana. D. 1963.

W.E.B. Du Bois is the author of books: The Souls of Black Folk, Black Reconstruction in America 1860-1880, Darkwater: Voices from Within the Veil, Writings: The Suppression of the African Slave-Trade / The Souls of Black Folk / Dusk of Dawn / Essays and Articles, John Brown, The Philadelphia Negro: A Social Study, The Quest of the Silver Fleece, Dark Princess, The Comet, The Negro

The Souls of Black Folk
This landmark book is a founding work in the literature of black protest. W. E. B. Du Bois (1868–1963) played a key role in developing the strategy and program that dominated early 20th-century black protest in America. In this collection of essays, first published together in 1903, he eloquently affirms that it is beneath the dignity of a human being to beg for those rights that belong inherently to all mankind. He also charges that the strategy of accommodation to white supremacy advanced by Booker T. Washington, then the most influential black leader in America, would only serve to perpetuate black oppression.
Publication of The Souls of Black Folk was a dramatic event that helped to polarize black leaders into two groups: the more conservative followers of Washington and the more radical supporters of aggressive protest. Its influence cannot be overstated. It is essential reading for everyone interested in African-American history and the struggle for civil rights in America.
02

Black Reconstruction in America 1860-1880
The pioneering work in the study of the role of Black Americans during Reconstruction by the most influential Black intellectual of his time.

Darkwater: Voices from Within the Veil
The distinguished American civil rights leader, W. E. B. Du Bois first published these fiery essays, sketches, and poems individually nearly 80 years ago in the Atlantic, the Journal of Race Development, and other periodicals. Reflecting the author's ideas as a politician, historian, and artist, this volume has long moved and inspired readers with its militant cry for social, political, and economic reforms for black Americans. Essential reading for students of African-American history
04

Writings: The Suppression of the African Slave-Trade / The Souls of Black Folk / Dusk of Dawn / Essays and Articles
Historian, sociologist, novelist, editor, and political activist, William Edward Burghardt Du Bois was the most gifted and influential black intellectual of his time. This Library of America volume presents his essential writings, covering the full span of a restless life dedicated to the struggle for racial justice.

The Suppression of the African Slave-Trade to the United States 1638–1870 (1896), his first book, renders a dispassionate account of how, despite ethical and political opposition, Americans tolerated the traffic in human beings until a bloody civil war taught them the disastrous consequences of moral cowardice.

The Souls of Black Folk (1903), a collection of beautifully written essays, narrates the cruelties of racism and celebrates the strength and pride of black America. By turns lyrical, historical, and autobiographical, Du Bois pays tribute to black music and religion, explores the remarkable history of the Reconstruction Freedman’s Bureau, assesses the career of Booker T. Washington, and remembers the death of his infant son.

Dusk of Dawn (1940) was described by Du Bois as an attempt to elucidate the “race problem” in terms of his own experience. It describes his boyhood in western Massachusetts, his years at Fisk and Harvard universities, his study and travel abroad, his role in founding the NAACP and his long association with it, and his emerging Pan-African consciousness. He called this autobiography his response to an “environing world” that “guided, embittered, illuminated and enshrouded my life.”

Du Bois’s influential essays and speeches span the period from 1890 to 1958. They record his evolving positions on the issues that dominated his long, active life: education in a segregated society; black history, art, literature, and culture; the controversial career of Marcus Garvey; the fate of black soldiers in the First World War; the appeal of communism to frustrated black Americans; his trial and acquittal during the McCarthy era; and the elusive promise of an African homeland.

The editorials and articles from The Crisis (1910–1934) belong to the period of Du Bois’s greatest influence. During his editorship of the NAACP magazine that he founded, Du Bois wrote pieces on virtually every aspect of American political, cultural, and economic life. Witty and sardonic, angry and satiric, proud and mournful, these writings show Du Bois at his freshest and most trenchant.
05

The Philadelphia Negro: A Social Study
In 1897 the promising young sociologist William Edward Burghardt Du Bois (1868-1963) was given a temporary post as Assistant in Sociology at the University of Pennsylvania in order to conduct a systematic investigation of social conditions in the seventh ward of Philadelphia. The product of those studies was the first great empirical book on the Negro in American society.

More than one hundred years after its original publication by the University of Pennsylvania Press, The Philadelphia Negro remains a classic work. It is the first, and perhaps still the finest, example of engaged sociological scholarship--the kind of work that, in contemplating social reality, helps to change it.

In his introduction, Elijah Anderson examines how the neighborhood studied by Du Bois has changed over the years and compares the status of blacks today with their status when the book was initially published.
07

The Quest of the Silver Fleece
Originally published in 1911, The Quest of the Silver Fleece was the first novel to come from world-famous sociologist and civil-rights leader W.E.B. Du Bois. A controversial title of its time, the novel chronicles the complex interactions between Northern financing and Southern politics as it follows the story of free-spirited Zora, child of a Southern swamp, and her romance with Yankee-educated Bles, who will eventually face the opportunity to claim political power through corrupt means. In the middle of it all is the silver fleece, a crop of cotton rich with meaning and symbolism.

In the tradition of other incendiary novels that explore market forces at the turn of the century, such as Frank Norris’s The Pit and Upton Sinclair’s The Jungle, The Quest of the Silver Fleece was seen as an “economic study” by Du Bois, yet it was also a romantic and otherwordly saga, loosely based on the Greek myth from which it takes its name. Using literary conventions to expose and oppose America’s views on race, Du Bois presents a sprawling and provocative work that continues to engage readers and inspire debate among literary scholars today.
08

The Comet
In a vaguely futuristic yet oddly contemporary world, a passing comet casts a shadow of death over Manhattan. Only two survive: a black man whose world has been one of poverty and hard work, and a white woman who knows only leisure and privilege.
If humanity is to have a future, the two must build a new world from the wreckage of the old.
10

The Negro
"The time has not yet come for a complete history of the Negro peoples. Archeological research in Africa has just begun, and many sources of information in Arabian, Portuguese, and other tongues are not fully at our command; and, too, it must frankly be confessed, racial prejudice against darker peoples is still too strong in so-called civilized centers for judicial appraisement of the peoples of Africa. Much intensive monographic work in history and science is needed to clear mooted points and quiet the controversialist who mistakes present personal desire for scientific proof. Nevertheless, I have not been able to withstand the temptation to essay such short general statement of the main known facts and their fair interpretation as shall enable the general reader to know as men a sixth or more of the human race. Manifestly so short a story must be mainly conclusions and generalizations with but meager indication of authorities and underlying arguments. Possibly, if the Public will, a later and larger book may be more satisfactory on these points." -- W.E.B. Du Bois Complete with maps and reading guilde.] Original publication date: 1915.