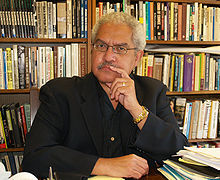 Manning Marable was an American professor of public affairs, history and African-American Studies at Columbia University. He founded and directed the Institute for Research in African-American Studies. He authored several texts and was active in progressive political causes. At the time of his death, he had completed a biography of human rights activist Malcolm X, entitled Malcolm X: A Life of Reinvention.

Manning Marable is the author of books: Malcolm X: A Life of Reinvention, How Capitalism Underdeveloped Black America: Problems in Race, Political Economy, and Society, Let Nobody Turn Us Around: Voices on Resistance, Reform, and Renewal an African American Anthology, Race, Reform, and Rebellion: The Second Reconstruction in Black America, 1945-1990, Living Black History: How Reimagining the African-American Past Can Remake America's Racial Future, W. E. B. Du Bois: Black Radical Democrat, The Portable Malcolm X Reader, Freedom: A Photographic History of the African American Struggle, The Great Wells Of Democracy: The Meaning Of Race In American Life, Beyond Black and White: Rethinking Race in American Politics and Society

Malcolm X: A Life of Reinvention
Selected by The New York Times Book Review as a Notable Book of the Year Years in the making-the definitive biography of the legendary black activist.

Of the great figure in twentieth-century American history perhaps none is more complex and controversial than Malcolm X. Constantly rewriting his own story, he became a criminal, a minister, a leader, and an icon, all before being felled by assassins' bullets at age thirty-nine. Through his tireless work and countless speeches he empowered hundreds of thousands of black Americans to create better lives and stronger communities while establishing the template for the self-actualized, independent African American man. In death he became a broad symbol of both resistance and reconciliation for millions around the world.

Manning Marable's new biography of Malcolm is a stunning achievement. Filled with new information and shocking revelations that go beyond the Autobiography, Malcolm X unfolds a sweeping story of race and class in America, from the rise of Marcus Garvey and the Ku Klux Klan to the struggles of the civil rights movement in the fifties and sixties. Reaching into Malcolm's troubled youth, it traces a path from his parents' activism through his own engagement with the Nation of Islam, charting his astronomical rise in the world of Black Nationalism and culminating in the never-before-told true story of his assassination. Malcolm X will stand as the definitive work on one of the most singular forces for social change, capturing with revelatory clarity a man who constantly strove, in the great American tradition, to remake himself anew.
02

Preface
How Capitalism Underdeveloped Black America A Critical Assessment
Introduction to the First Edition
Part 1 The Black Majority
Chapter 1 The Crisis of the Black Working Class
Chapter 2 The Black Poor
Chapter 3 Grounding with My Sisters
Chapter 4 Black Prisoners and Punishment in a Racist/Capitalist State
Part 2 The Black Elite
Chapter 5 Black Capitalism
Chapter 6 Black Brahmins
Chapter 7 The Ambiguous Politics of the Black Church
Chapter 8 The Destruction of Black Education
Part 3 A Question of Genocide
Chapter 9 The Meaning of Racist Violence in Late Capitalism
Chapter 10 Conclusion: Towards a Socialist America

"Manning Marable examines developments in the political economy of racism in the United States and assesses shifts in the American Political terrain since the first edition....He is one of the most widely read Black progressive authors in the country."-Black Employment Journal

"The reissue of Manning Marable's How Capitalism Underdeveloped Black America confirms that this is a classic work of political history and social criticism. Unfortunately, Marable's blistering insights into racial injustice and economic inequality remain depressingly relevant. But the good news is that Marable's prescient analysis-and his eloquent and self-critical preface to this new edition-will prove critical in helping us to think through and conquer the oppressive forces that remain."-Michael Eric Dyson, author of I May Not Get Therewith You: The True Martin Luther King, Jr.

"For those of us who came of political age in the 1980s, Manning Marable's How Capitalism Underdeveloped Black America was one of our bibles. Published during the cold winter of Reaganism, he introduced a new generation of Black activists/thinkers to class and gender struggles within Black communities, the political economy of incarceration, the limitations of Black capitalism, and the nearly forgotten vision of what a socialist future might look like. Two decades later, Marable's urgent and hopeful voice is as relevant as ever."-Robin D.G. Kelley, author of Yo' Mama's DisFunktional!:
03

Let Nobody Turn Us Around: Voices on Resistance, Reform, and Renewal an African American Anthology
This anthology of black writers traces the evolution of African-American perspectives throughout American history, from the early years of slavery to the end of the 20th century. The essays, manifestos, interviews, and documents assembled here, contextualized with critical commentaries from Marable and Mullings, introduce the reader to the character and important controversies of each period of black history. The selections represent a broad spectrum of ideology. Conservative, radical, nationalistic, and integrationist approaches can be found in almost every period, yet there have been striking shifts in the evolution of social thought and activism. The editors judiciously illustrate how both continuity and change affected the African-American community in terms of its internal divisions, class structure, migration, social problems, leadership, and protest movements. They also show how gender, spirituality, literature, music, and connections to Africa and the Caribbean played a prominent role in black life and history. To view the companion study guide, please click here http: //www.rowmanlittlefield.com/ISBN/074252...
04

Race, Reform, and Rebellion: The Second Reconstruction in Black America, 1945-1990
The original edition of this book was written during the second year of the Reagan administration. It reflected two perspectives, the thoughts of the social historian, and the commentary of the political theorist and social activist among African-Americans in the post-1975 period. This book elaborates and expands these theories in light of the developments that have occurred in the 1980s.
05

Living Black History: How Reimagining the African-American Past Can Remake America's Racial Future
06

W. E. B. Du Bois: Black Radical Democrat
'Marable's biography of Du Bois is the best so far available.' Dr. Herbert Aptheker, Editor, The Correspondence of W.E.B. Du Bois 'Marable's excellent study focuses on the social thought of a major black American thinker who exhibited a 'basic coherence and unity' throughout a multifaceted career stressing cultural pluralism, opposition to social inequality, and black pride.' Library Journal Distinguished historian and social activist Manning Marable's book, W. E. B. Du Bois: Black Radical Democrat, brings out the interconnections, unity, and consistency of W. E. B. Du Bois's life and writings. Marable covers Du Bois's disputes with Booker T. Washington, his founding of the NAACP, his work as a social scientist, his life as a popular figure, and his involvement in politics, placing them into the context of Du Bois's views on black pride, equality, and cultural diversity. Marable stresses that, as a radical democrat, Du Bois viewed the problems of racism as intimately connected with capitalism. The publication of this updated edition follows more than one hundred celebrations recently marking the 100th anniversary of Du Bois's The Souls of Black Folk. Marable broadens earlier biographies with a new introduction highlighting Du Bois's less-known advocacy of women's suffrage, socialism, and peace and he traces his legacy to today in an era of changing racial and social conditions.
07

Manning Marable's Pulitzer Prize–winning biography, Malcolm X: A Life of Reinvention, has already begun to reshape perceptions of one of America's great revolutionary thinkers. This volume, the first collection of major documents addressing Malcolm X in decades, features never-before-published material, including articles from major newspapers and underground presses, oral histories, police reports, and FBI files, to shine a brighter light on Malcolm's life and times. Conceived as both a companion to the biography and a standalone volume, and assembled by Marable and his key researcher, Garrett Felber, prior to Marable's untimely death, The Portable Malcolm X Reader presents an invaluable portrait of Malcolm X.

Freedom: A Photographic History of the African American Struggle
From the bonds of slavery to the Civil Rights Movement, from the Deep South to the northern metropolises, from the Harlem Renaissance to the riots of South Central Los Angeles, Freedom tells of the African American struggle for equality from the first photographic records in the 19th century all the way to the present. It is organized chronologically in five sections with introductory essays and narrative captions by two noted scholars, Manning Marable and Leith Mullings. This selection of photographs, many never seen before, reveals the journey in all its complexity and nuance, covering the struggle in its many different aspects - political, social, economic and cultural. Still relevant today, the photographs tell of the tremendous courage, determination and power of a people fighting for a common goal.
09

The Great Wells Of Democracy: The Meaning Of Race In American Life
In his boldest and most accessible book to date, Manning Marable lays out a new way to think about the past and the future of race in America. Building upon a unique framework for understanding black history from slavery to Jim Crow to the modern urban ghetto, Marable charts a new course for racial progress. He looks beyond the impasse of liberal strategies such as affirmative action and proposes a new kind of inclusive democracy. Exploding traditional lines of left and right, Marable stakes out such controversial and seemingly incompatible positions as the re-enfranchisement of felons, state support for faith-based institutions, reparations for slavery that systematically inject capital into the black community, and a reconfiguration of racial identities that accounts for the increasingly multi-racial nature of our society. He exhorts us to construct a new political language and practical public policies to bridge the racial divide -- so that we do no less than reinvent the democratic project called America. Combining the breadth of C. Vann Woodward's The Strange Career of Jim Crow with the urgency of Cornel West's Race Matters, Manning Marable offers the most challenging and important book on the politics of race to appear since the heyday of the civil rights movement.
10

Beyond Black and White: Rethinking Race in American Politics and Society
A generation removed from the Civil Rights Movement and the Black Power explosion of the 1960s, the pursuit of racial equality and social justice for African-Americans seems more elusive than ever. The realities of contemporary black America capture the nature of the crisis: life expectancy for black males is now below retirement age; median black income is less than 60 per cent that of whites; over 600,000 African-Americans are incarcerated in the US penal system; 23 per cent of all black males between the ages of eighteen and 29 are either in jail, on probation or parole, or awaiting trial. At the same time, affirmative action programs and civil rights reforms are being challenged by white conservatism.

Confronted with a renascent right and the continuing burden of grotesque inequality, Manning Marable argues that the black struggle must move beyond previous strategies for social change. The politics of black nationalism, which advocates the building of separate black institutions, is an insufficient response. The politics of integration, characterized by traditional middle-class organizations like the NAACP and Urban League, seeks only representation without genuine power. Instead, a transformationist approach is required, one that can embrace the unique cultural identity of African-Americans while restructuring power and privilege in American society. Only a strategy of radical democracy can ultimately deconstruct race as a social force.

Beyond Black and White brilliantly dissects the politics of race and class in the US of the 1990s. Topics include: the Clarence Thomas-Anita Hill controversy; the factors behind the rise and fall of Jesse Jackson’s Rainbow Coalition: Benjamin Chavis and the conflicts within the NAAPC; and the national debate over affirmative action. Marable outlines the current debates in the black community between liberals, ‘Afrocentrists’, and the advocates of social transformation. He advances a political vision capable of drawing together minorities into a majority which can throw open the portals of power and govern in its own name.